Great news from Cat Central we have just launched a Prize Giveaway designed to reward my fans for either buying my book or clicking that cute little ‘Donate’ button which appears on a couple of pages on my wickedly wonderful website or www www.thecatsdiary.com.

By either buying my book or donating as little as a dollar (yes just a dollar although who would be that mean to a Cat?) you can win one of a number of wonderful prizes, the first ‘biggee’ is an iPod touch.

Yes you read that correctly this master of philanthropy is giving away an iPod touch – “Wow,” yes you took the words right out of my mouth!

So what are you waiting for click over to be part of the giveaway now and join in. 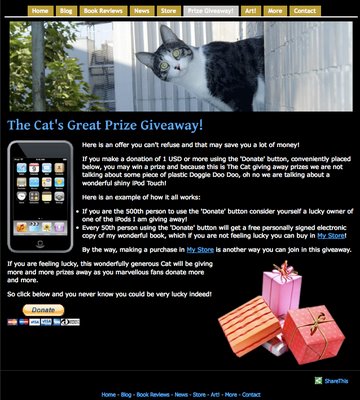 Recently I have heard that scientists have decided, after conducting new research, that Black Tea is as good for you as Green Tea if you want to stay away from cancer even though scientific studies said that it wasn’t.

I also heard that apparently Eggs are good for you, in fact scientists now call Eggs a “superfood” although until now they were labelled by them as “dangerous” if you ate more than one a week.

Scientists seem to be a little confused about food don’t you think? Then there is what they have said about out planets climate, it seems the biggest danger to our planet and environment comes from climate scientists who seem to have go themselves in a right pickle and don’t seem to be able to tell their posterior from their anterior or their depleted ozone layers from a slowing Gulf Stream. Silly scientists!

This is great news for people and Cats who like Full English Breakfasts and of course bad news for the slimmers and joggers out there! But then it seems that the slimmers and the joggers are the ones who suffer the most heart attacks any way, at least we now know why, they have been slipping into MacDonalds while they are out jogging to fill up on more fat than their bodies can take, and who can blame them, their bodies told them to do that and fitness fanatics always ‘listen’ to their bodies!

So I know what this clever Cat will be stealing from a plate near me soon, yes a Full English Breakfast. Until of course scientists decide that a Full English Breakfast is bad for Cats and Humans alike again or maybe this time we all should do what makes sense and eat what we like and stop listening to people who tell us such a lot of scientific nonsense.