Did I say you humans are quite mad? As bonkers as well were people who like to hit their heads on the closest wall! Why well just read this snippet from a press release, look at the picture and judge for your self!

“The M-Dress, lets wearers make and receive calls by slipping their sim card under the label, allowing them to keep their usual numbers.

Maybe in all of this madness humans should allow Cats to take over the stress of running their day to day lives, I am sure that we Cats will do a better, more sensible and fairer job than you lot have achieved so far.

So they have recently found an enormous solar system consisting of seven planets which orbit a sun like star about 127 light years from Earth and I wondered if it needed a name?

If this new solar system does need a name then may I drop one into the hat right now? How about “The Cat Solar System/’ with the main habitable planet being called simply ‘Planet Cat!’ Sounds not only good to me, it sounds absolutely stellar.

If the new solar system is called ‘The Cat’ with ‘Planet Cat’ the home planet then I promise to mention it in my next book which as you loyal fans know is a travelogue, but sadly I have a feeling that 127 light years is a bit of a step to go to get a picture of me on Planet Cat for the cover which is a shame because my latest book has a wonderful picture of me (the divine picture is below).

What on earth was this old cow thinking of? Well we don’t know and remember we are just Cats, but again it raises a serious question why are humans so awful? Sadly because we are just Cats we can’t answer that one either. Unfortunately this in ability to answer serious questions about the dreadful elements of the human race may of course lead to us Cats getting trashed.

Currently Ginger, Nobby, Jessie and the rest of my friends are raising money so that we can employ security guards and get the protection we deserve when we happen to want to stroll along a wall all to close to a trash bin.

If there are any donations left over I think that we should get private detective and find the awful, mean and petty old bag who did this to an unsuspecting and obviously friendly Cat and then dump her in a trash bin.

“Hello nice lady would you like to stroke me?” Asks an innocent Cat.

“Nice kitty of course I would!”

“How about a little bit of fun?” Asks the nice lady.

Words fail me, but I hope she gets cancer don’t you?

Is it me or is it worse that this dreadful Cat hater wasn’t some young tearaway but a silver haired middle aged woman who you would think was a pillar of any community – what is the world coming to?

You can see the video for yourself here, its Sky News (Fox in the states) but for once they may be doing the world a favour:-

Only in China these days can you find cruelty like this (in the picture below). Oh if only that were true, but sadly you will find cruelty similar to the Chinese inhumane treatment of this Black Bear in India and Pakistan and a lot of places that consider themselves to be civilised these days.

In this concerned Cat’s opinion there is one word for people who enjoy hurting animals and that is ‘scum.’ And India and China are the scum of the world.

I watched Sex in the City 2 yesterday – it was the longest three minutes of my life. Please tell me who told Sarah Jessica Parker that she was pretty let alone talented? Someone was lying to her!

The only good thing about SJP’s looks is that they make the other three bints look good, but then that is like saying that up against Osama bin Laden Che Guevara was good looking! If you see what I mean!

But then frankly both of those dreadful murdering maniacs top the eternally dreadful SJP with their good looks, dress sense and of course sense of humour – tee hee.

I can see why the picture (below) of Che Guevara didn’t appear on any tee shirts (oops above sorry) when it was the fashion to wear a tee shirt with Che’s imagine on it or indeed nowadays when you see old hippies and idiots doing the same because Che Guevara looks a bit gay here does anyone else think that?

Someone once described the photograph of me on the cover of my wonderful best selling masterpiece “Getting Out – Excerpts From A Cat’s Diary” which you can get here Amazon.com as a work of art and I sincerely believe that they were speaking the truth.

I found this picture of an astonishingly good looking, well read and cultured clever Cat, for a moment I thought it was me! But then I realised that the artist Charles Wysocki had probably just seen a photograph of me and wanted to use me as the perfect model. 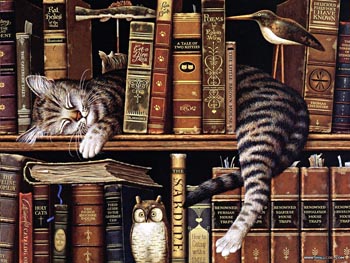 Looking through the book on the bookshelf I have to say I thoroughly recommend the volume on the lower shelf ‘The Sardine,’ when I read this magical book I found it to be not only insightful but also a tender loving story with a very happy and satisfying ending.

While we are talking about the books in the picture and not me does anyone know where I can get a copy of ‘Delicious Field Mice I have Known’ and who wrote it? As yet I haven’t read it but now that I know of it, it is top of my reading list.