I have been asked constantly recently a range of questions about poor old Dreamworks’ latest chump of a movie ‘Puss In Boots!’ 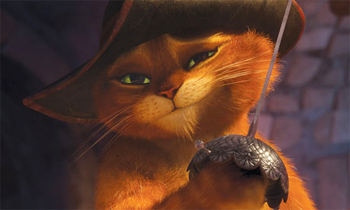 The questions range include;

1. Is there any thing I can do to help Dreamworks write either a funny or successful movie (or preferably both) in the future?

2. Is there anything I can do for this turkey of a movie that they have in the Movie houses at the moment?

3. Can I think of anything to do with enormous surplus of ‘Puss In Boots’ merchandise that Dreamworks have. 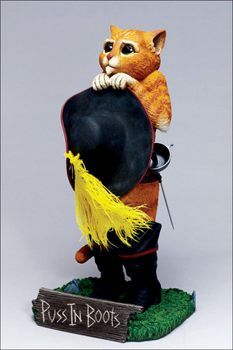 The sad fact (and I have a feeling that the Cat already knows it judging but his pose in the picture above) is that I can’t help the movie or the people behind it or assist in shifting tons of ‘Puss In Boots’ figures, cuddly toys, action sets. Although I do believe that I could find a use for any ‘Puss In Boots’ toilet paper!

‘Puss In Boots’ the movie suffers from being spun from a rather frail character in a successful franchise, like so many TV series that none of us can quiet remember.

The movie itself suffers from the fact that Dreamworks really doesn’t have any idea what young people find interesting, funny and most of all engaging; indeed I wonder if any grown-ups at Dreamworks asked even just one child if they liked actually liked ‘Puss In Boots?’ And not the one caught up in the obvious regard that they had for the Puss in footwear in Shrek.

The original ‘Puss in Boots’ story always bored the diapers off me when I was a kitten! And I am sure that goes for normal ordinary children as well.

The reason why ‘Shrek’ was so successful was that it was ‘different’ the reason why ‘Puss In Boots’ is a Dog of a movie and has had incredibly disappointing box office receipts is that it is just um, err, well, just that it’s bland, grey, tired, unoriginal – need I say more?

So onto something that is wonderful, colourful, funny, marvellous and the work of a genius and I have to say closer to my heart and will make a small fortune. I am currently looking for funding for a movie based on my first masterpiece of feline literature ‘Getting Out Excerpts from a Cat’s Diary’ and judging by the fact that people with money are idiots and to prove that have invested heavily in a mess of a movie like ‘Puss In Boots’ I am expecting the cash any day.

As far as I can tell I think I have only one problem, and that is that if the idiots with money are prepared to pour so much cash into a Donkey of a project like ‘Puss In Boots’ will they put vast sums of money into something that is brilliantly written, desperately funny, and a work of some considerable genius! It is probably doubtful because that would require taste and imagination!

Can you see that I am face by an awful dilemma! Should I dumb down the script, take out the jokes and worse base my story on a tired nursery rhythm or English Pantomime? And believe it or not there is yet another problem with that scenario!

Are there any tired children’s stories left? Haven’t Disney and Dreamworks animated all of them already and are now at their wits end running around saying “oh no, we have to do something original now!”

Of course that won’t get them anywhere you only have to look at Pixar to see that, they provide movies with amazing technical brilliance, incredible animated tricks and so on and so forth but the storylines tend to be weak.

Just think of any of those dreadful driving movies staring someone called ‘Vin,’ the special effects are um… ‘special’ but that’s as far as it goes. Once you have seen a string of special effects you tend to be immune to them but not to the drone of the movie.

So if you have a few mill or even a few thou don’t let it go to waste, buy a share in what will be the animated movie moment of the century and help fund my wonderful movie as soon as possible so that we can get on with the production of that and the sequel at the same time.

If you need to have a quick read of my wonderful book before you decided to fund my movie then you can get it here Paperback edition of Getting Out at Amazon.com and of course the movie sequel here Paperback edition of The Cat’s Travelogue and do get a move on, I want to start filming as early as possible, I am a Cat who writes blogs who is in a hurry to be the first Cat to win an Oscar.