You have to feel sorry for all of the Chocolate Bunnies around the world who gave their ‘everything’ to make this Easter and of course for the one that came a week or so later, if your religion disagrees with the one that has just celebrated Easter! 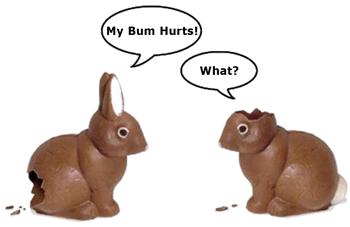 As I watched so many Chocolate Bunnies get eaten I started to wonder just how many Chocolate Bunnies have been eaten this Easter and so I asked that ever ‘reliable’ source of information on the internet (Truthful Sarcasm Alert) – Google. And as Google has no idea about anything except advertising I was directed to one of their most successful customers an ‘august’ body, who’s advice, along with anything suggested by Google, I wouldn’t use to save a life – Huffington Post.

According to Huff Huffington Post “‘approximately’ (a lovely vague word don’t you think?) 90 million Chocolate Bunnies eaten this Easter,” it has to be said that this figure of munched Bunnies obviously accounts for the number of Chocolate Bunnies devoured by the folk who believe that Easter comes at least a week before the other bunch of Christians, who in turn prefer their Easter and indeed all of their religious holidays to come sometime later in the year.

While dawdling on the internet I also noticed that 74% of American children believe chocolate bunnies should be eaten ears first! Although another source said that figure was actually 76% but then again that website was one of those awful sites that offers ‘answers’ together with ‘Phosphate for sale’ on the page I was reading.

After a short while of reading so many ‘interesting’ web pages I dozed off and woke up to discover that I had arrived at a web page owned by Newport Television LLC or more to the point Local 12 which is WKRC Cincinnati and we all know who they are right? You know it’s amazing what a sleepy Cat’s paw can do for a boring web search.

Now Local 12 was running a little competition where bored viewers tired of watching dreadful television programmes (and I am not suggesting here that those programmes are anything to do with Local 12 of course which I think might be a TV station in Cincinnati) can read ‘interesting’ facts and something called a “Freeze Warning” which rather disappointedly said that the “”Freeze warning” was going to expire at 9.00 am.” 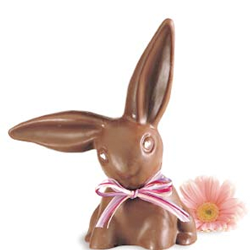 Anyway I digress and if you read my books you will be used to that sort of thing. Back to Chocolate Bunnies but actually staying with Local 12 or their website at least. As I said above there was a competition running to see if viewers either knew or cared about the answer to the question “Approximately how many chocolate bunnies are made each year?”

Oddly enough the rest of the website after the title which was in normal sensible and most of all readable mixture of upper and lowercase letters was from there on all written in capitals, as it first of all told anyone who didn’t know that “this Sunday was Easter Sunday” and then asked a repeat of the title or more to the point – “Approximately how many chocolate bunnies are made each year?”

Excited readers or is it viewers? No it must be visitors were given a choice of three possible answers neatly arranged in a column as answers 1,2,3 like so:-

Then just below without a hint of mystery and to ensure that the question wasn’t too difficult for anyone who might be viewing the page was the answer and happily for us a credit as to where Local 12 got the information.

“According to the website for the National Confectioners Association, candyusa.com, 90 million chocolate Easter bunnies are made for Easter each year.” I have out of courtesy to my readers changed the text from all capitals to something more readable and sensible.

Actually there was more information from those obviously good people at National Confectioners Association after the obvious answer and as it’s mildly informative I though I would share it with you:-

“Here are some other sweet facts about the holiday: 16 billion Jelly Beans are made for Easter, red is the favorite Jelly Bean color for children, and 76% of people eat the ears on Chocolate Bunnies first.”

Again I have changed the capitals to something more readable but I have left the misspelt words like ‘colour’ and ‘favourite’ because sometimes it’s quite nice not to see the French influence in our shared language. Although of course I would usually moan about the American mangling of my beautiful language but at the moment a thought has just struck me and that is if the really useful information above came from the National Confectioners Association, and their web address is www.candyusa.org then maybe the information about eating Easter Bunnies is not very accurate as it probably only applies to the country that sometimes thinks that it’s the whole of the world namely the good ‘olde’ US of A.

All of which means that the true number of Easter Bunnies eaten at Easter probably will never be known and I for one have decided that I don’t really care because I have become rather bored with the whole Easter Bunny project and frankly am glad that not being an Orthodox anything I can have almost a whole year off between now and Easter.

Incidentally I checked out the website www.candyusa.com and it didn’t load in my browser which is odd but when I did a little checking I discovered that the good people at Local 12 had used .com and not .org which is the correct address tisk tisk! But sadly even when I used the correct web address – www.candyusa.org the site still didn’t load!