As the title says, for anyone who is interested, I am back from Moscow.

It was a long and tiring week, full of book ‘pawings’ in over elaborate Muscovite shops, partying at over ormolued penthouses with vast overdress, heavily be-blinged Russians, who clearly had no idea who I was, but had never heard of “The Emperor’s New Clothes” children’s story and so when I was introduced as the star of the party or ‘show’ as I like to think of these affairs, people were falling over themselves to meet me and tell me through a series of translators, Russian to English, English to what they described as ‘Cat’ (but wasn’t, but then Russians lie), and back again through this incompetent chain of inadequate humans.

Before I go to far with this little blog I thought you, my dear cuddly readers, might like a quick gawp at one of the aforementioned over ormolued penthouses. Sadly I can only offer a snap of the outside because I was told in no uncertain terms by a bear of a bodyguard “Nyet!” when I tried to point my little lens at the interior of this monument to glaring bad taste. Well actually thinking about it; his ‘terms’ were certain, he didn’t say anything but leaned over and glared at me, as the room went dark, in his shadow, I thought I was going to follow if you see what I am on about! 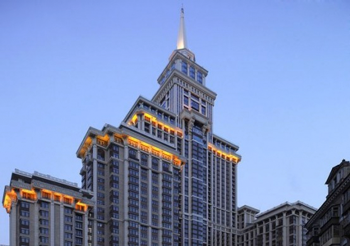 Still the good news is that as the overly blinged airheads who for some wonderful reason had decided I was so much more than just a writer, and in that of course they were quite correct, fought to get copies of my masterpiece of feline literature “Getting Out – Excerpts from a Cat’s Diary” I have sold thousands of copies of the ‘wondertome’ as it has been described.

Best of all is that this sharp eyed business Cat noticed that he was becoming a bit of a celeb and rushed several crates of his own private stock of “Getting Out – Excerpts from a Cat’s Diary” over to Moscow and sold the lot at an enormous profit even taking into account the titanic bribes paid to Russian airline, customs, and internal security officials and to the Police and still made a fortune selling my special edition dump bin packs of 100 copies of “Getting Out – Excerpts from a Cat’s Diary” where the buyer gets 100 pristine copies of my book to treasure.

What a week! Until now I have always thought that people who wanted things like expensive watches, designer label clothes, bling and Apple ‘ianythings’ were simply stupid and acted like sheep who flock to buy something because it has a ‘label’ on it or lots of other likeminded sheep have said that the ‘something’ “is just so cool and your very existence would end if you didn’t possess at least one” – if you see what I mean.

By the way I am not suggesting that behaviour is actually the behaviour of sheep, I am insulting humans in a subtle way that the sheep I am talking about won’t realise I am insulting them, even after they read this last sentence.

But the above was what I thought until now. Now I think that these sheep are wonderful, because of all of those wonderful sheep I can see out of the window when I sit on the pile of hard currency (of course) that I brought back with me, so all I have to say is thanks Moscow and don’t worry this Cat like Madonna, the Rolling Stones and Bruce Springsteen will be back on tour all too often, even when I am, again like the aforementioned rock and pop stars (well I did say Madonna so they aren’t all rock stars), almost too old to use my little finger to move my electric wheelchair.