It was the Spanish F1 Grand Prix this weekend and although I didn’t have the opportunity to see it at the track in Barcelona I do intend to see it on TV so please don’t tell me the result.

When I go to the GP in Barcelona or indeed visit any part of Spain I have to say I always love it, although I also have to say that the average Spaniard’s attitude to animals is worse than absolutely awful, because they are cruel and seem to think that animals should be treated like err… um… animals, which as you will know if you have read either of my masterpieces of feline literature ‘Getting Out Excerpts from a Cat’s Diary’ or ‘The Cat’s Travelogue’ you will know that I don’t agree with animals being treated in that way. Sadly if you have read both of them you will also know that it isn’t only the Spanish alone from the world’s over population that treat animals badly, but as I say in my more Martin Luther King moments “our day will come!” Or did Ruby & the Romantics say it in a song that Amy Winehouse sang it before her clogs were popped? I don’t really know the answer to that and if I did it would spoil the little jokette tee hee!

Having said all of that Spain is a nice place to visit and as a holiday destination caters for all tastes and pockets even odd minorities as you can see from the label below, they even make a cheese especially for morons bless them! That is bless the Spanish and the Morons of course, we Cats can’t be criticised for being exclusive in our blessings. 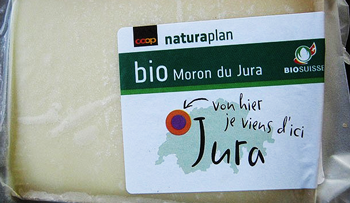 And before you all write in, in your tens, I know that the cheese is actually Swiss and made by the Morons of the Canton of Jura on the shores of Lake Geneva, but the hunk of cheese above was on sale in Spain and I wanted to mention the Spanish GP, well I didn’t want to mention the Spanish GP really I wanted to watch it by my translator said that if I didn’t write a blog first I couldn’t watch it. Grrr!

Usually I would include a picture of the Spanish GP but if I do that I will probably find out the result and it goes without saying that I don’t want to know the result just yet because that would spoil my viewing pleasure wouldn’t it?