I heard from those small, but persistent bullies, the Chinese government again this week and I have to say I didn’t like their tone at all!

Apparently I have been unfairly picking on them and their comrade translators and “making too much funiness from their work the hardest.” Whatever that means. Happily as we speak I haven’t received the sort of cyber going over that either Google, for pointing out ways to overcome draconian censorship and the US government for causally publishing the pollution figures for Chinese cities – which if you’ve missed them are soberly described by some experts as “off the scale.”

Now, this Cat has been accused of being a lot of things but one of those things is not stupid and so I thought I would pick on India, not for a change because I think that like that other titan of economic growth and future leader of the world who’s inhabitants manage, despite their government saying otherwise, to do some really dreadful things, one of which is to condone underage marriage of little girls to old men and little boys to old women. 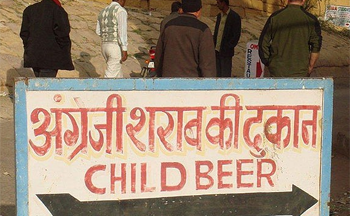 Here is a quote from the Asian Tribune which is published by World Institute For Asian Studies and sums up the attitude of Indians today towards child marriages.

“Chetram, a 56-year-old man residing in a rural village of the Surguja district of Chhattisgarh, who gleefully boasted of marrying six girls to date, all between the ages of eight and 16 years when he was 10, 14, 17, 23, 25, and finally 47 years old.”

So come on India you can launch rockets into space, brag about your economic growth, but you can’t stop dirty old men and women marrying little girls and boys – shame on you.

There that should keep the Chinese off my back for a while shouldn’t it?