According to articles in today’s English press, Mitt Romney has questioned whether Britain is ready for Olympic Games.

Yes believe it or not the Republican party presidential nominee actually questioned our/Britain’s ability to host London 2012 Olympics and asked whether the country is genuinely willing to “celebrate” the Games. 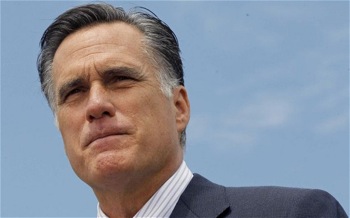 So with one simple thoughtless comment Uncle Mitt has done what the London Olympics Organising Committee couldn’t do, the Prime Minister of the UK – sorry I forget his name, tall inconsequential faffy type of chap… you know, what’s his name? And indeed the rest of the people involved in the London Olympics, or should that be according to Lord Coe after so many years of calling the London Olympic Games the “London Olympic Games” – the “UK Olympic Games,” I’d call Mitt ‘a bit of a Prawn” but I like Prawns so I won’t, i’ll do better than that and let my cuddly readers on both sides of the Atlantic decide what to call him!

Of course no one in the UK, most of whom are jealous of London and Londoners if they live outside of London didn’t like the Olympics!

We, that is, the people, and Cats of course of the UK, don’t actually like most things including ourselves, but when some jumped up asset stripper and presidential no-hoper comes to our country and suggests that we are a bunch of idiots who couldn’t organise a polygamist wedding in a Tabernacle or whatever it was he said it strikes home I can tell you.

Only the British allow themselves to be criticised by the err… British and no one else, I bet Mitt and his various wives, if he is a true follower of the faith, can expect to be one of the 3,500 people in the new modern London Aquadrome who won’t be able to see the top board in the diving competition because of the curved roof which obscures the view of the highest diving board.

What a shame that the UK Border Agency immigration staff were working at Heathrow Airport when they let him instead of being on strike as they promised they would be, or is that why he came early?

Still I pity poor Mitt I wouldn’t like to be in his brogues, during this trip and then when he so many more foreign policy mistakes on the next legs of what is probably his first trip outside of the US, and then gets roundly beaten by the presidential incumbent who let’s face it has disappointed too many people all too often.