Yesterday I was out and about in Prague and spotted this rather unobtrusive building which offers so much to all of those unfortunate enough to have problems with their hair and indeed problems of being without hair, I expect. 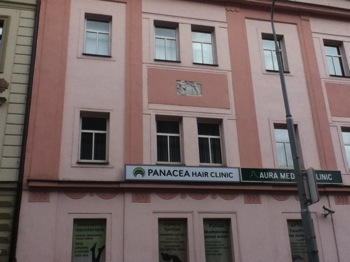 You know I think it’s great to be able to find a funny sign on one’s home turf don’t you?

Of course I hadn’t realised until I read it just now that Panacea is a girl’s name, it’s Greek actually, which makes you wonder whether Greeks like girls? Fancy calling your little one Panacea! I don’t.

As with most Greek names ‘Panacea’ was a goddess, one of quite a large a family of five. While her brothers were off being kings (two) and being sort of doctors at the same time to say nothing about being killed in a war with the Amazons (the tribe and not the online shop) Panacea wasn’t to be out done by her siblings, so it’s said (isn’t it always ‘said’ when you talk about gods), she came up with either a poultice or a potion (no one is quite sure – another ‘godly’ trick here I see) that could heal the sick.

This handy potion or poultice (recipe not included because no one knows what was in it)led to using the word Panacea in medicine to describe something that was a substance meant to cure all diseases.

What a shame that as far as I know anything that a god has done or created that’s useful is not in use today. Just imagine how useful Panacea’s potion or poultice would be for curing people with cancer, heart disease and the rest of the diseases that gods of any religion are prayed to, to heal and seemingly don’t listen.