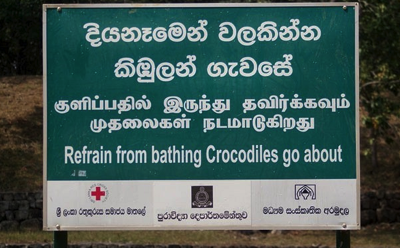 Just out of interest does anyone know what Crocodiles do when the “go about?” Is it a nautical term? meaning that Crocodiles are using the area to turn just like heavy trucks?

Or is the signwriter suggesting that Crocodiles go around in pairs mugging innocent people as in the 1970’s British Public Information Film whose title was “Watch out, watch out there’s a thief about!”

You humans are very confusing especially when using a language that isn’t your own but I am sure you believe you are rather competent in!