Yesterday I was out walking to get fit and slim and everything wonderful that is required these days by a very judgy society and I happened upon a wonderful find on about the 15th kilometre!

I was minding my own business puffing my way passed the city wall here in Prague and I happened upon a Japanese bakery, it wasn’t really something new or unusual because I knew it existed and even knew where it was, the surprise ‘find’ was that it was open!

Many a time before yesterday I have banged on their locked door and presumed that the poor Japanese Bakers were stone deaf, even trying to think of a little gag that went with stone deaf, like oh I don’t know, are deaf bakers stone ground deaf? But I gave up because it just wasn’t funny.

What was funny and a little marvellous was that they were open. So I went in counting my chickens and thanking the heavens, because clouds are as generous as chickens. The building itself was rather small and I got a bigger surprise once I was inside because it was the opposite of Dr Who’s Tardis, the inside, well the bit the public was allowed into, was minuscule and now you know I am talking small.

The above was true until I spotted some green buns, these ones in fact. 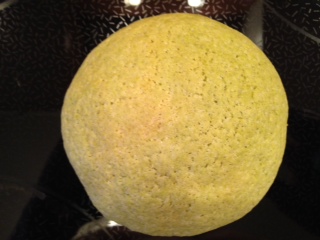 I promise you they are ‘green’ but a subtle green and the reason why these buns are green is that the topping is made from Japanese Green Tea I was informed by the (oddly enough) Czech baker, a small fidgety sort of person with a delightful Japanese style bakers hat folded over the majority of his head and brow.

Just to prove that these rolls, buns, cakes, whatever they are were ‘iced’ and I use that word loosely, well I use most words loosely but you know what I mean, here is a picture of the Bun’s bum or bottom as they probably say in the polite culture that is Japanese! 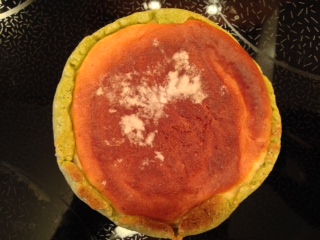 Actually the ‘icing’ looks greener here as well, green tea is probably heavy? Well ok it might not be but you can supply your own reason why it’s greener on the bottom, I don’t really care!

I asked the rather nervous chap behind the small counter what were the buns I was pointing and and he told me they were Melon Cakes, I found out later the Japanese call them Melon Pan, but that is neither here nor there and they do that because of the shape of the buns and texture of the icing.

Now I don’t know if you know this dear cuddly readers but I do like things that are different and I do rather like oriental food, apart from oddly enough raw fish, ! can take or leave that, or better still exchange it for Prawns of course.

I was very good, after buying the Melon Pan I didn’t gobble it up in a hungry frenzy, I left it in the bag and took it home to share. On tasting the Melon Pan my first thought was “why did I buy just one?” My second thought was to try and steal some of the other sections of the bun I had cut it into four but was only sharing it with one other!

My last thought, before the one filled with regret was that I should get some more Melon Pan and be quick about it.

Melon Pans ladies and gentlemen dear cuddly readers one and all are divine, or better, they do taste more of Melon than green tea, but the Melon taste is very subtle, the Pan itself is rather sweet but not too sweet… just trying to stop dribbling now!

Here are some other Melon Pan’s I found when I was looking for more information on them, aren’t they adorable?

Now here is something I should do more often, include a recipe. 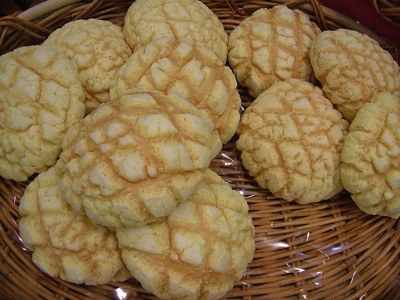 1. Add together the water, yeast and sugar. Make sure to use warm water.

2. Combine all bread ingredients into the bowl with the yeast and sugar.

4. Lightly oil a bowl. Place the kneaded dough in the bowl. Cover with a towel and allow to rise for 2 hours.

6. Pinch off walnut-sized chunks from the dough and roll it into balls. Allow the balls to rise for 15 more minutes.

10. Roll out the cookie balls enough that you’ll be able to coat the dough with a cookie ball.

11. Place the rolled out cookie ball around the bread dough ball. Leave the bottom uncovered and pinch the seams together.

12. Sprinke the top of each prepared bread with a small amount of sugar.

The person who I ‘borrowed’ this recipe from was American so measurements that say ‘c.’ I took to mean cups!

Sadly this recipe won’t give you a melon flavour, but that might be a blessing. Imagine trying to squeeze the juice out of a Honeydew? Not only that Green tea icing seems to be absent, but I think I enjoyed a rather exotic Melon Pan yesterday, however the normal ones are nice and I read that the Japanese are adding chocolate chips to theirs these days so it sounds like anything is possible when you make these delightful buns.