As my dear cuddly readers know full well. I am a Cat with opinions. I loathe Facebook, Fools, and Google, though not exclusively, I could add Royalty, Politicians, Wikipedia and Twitter but that might seem as though I was being churlish.

And out of that gaggle of ghastly I think I actually like Google the least. Why? I hear you ask in amazement, well they spy on their customers through their email which Google browses at its leisure, they mine the data that their spyware in the mobile phones’ operating systems that are built into them and they do the same to the users of their search engine.

Goodness knows what they will get up to when a lot of people become passengers in their driverless cars?

Here is a recent example of the fallibility of the Google algorithm, or to you and I the Google search engine. A tool which billions of people use everyday and seem to rely upon to provide ‘factual’ information! This newish feature is I believe laughingly called the “Knowledge Base,” well it had me rolling in my aisles I have to say!

Below is one of those tiles that half fills the page when you do a search for anything/one famous, it’s a collection of search result data that is cobbled together hurriedly by the search engine and dumped in place to provide some ‘pertinent'(and I use that word as a joke) facts (and that one’s a joke as well). 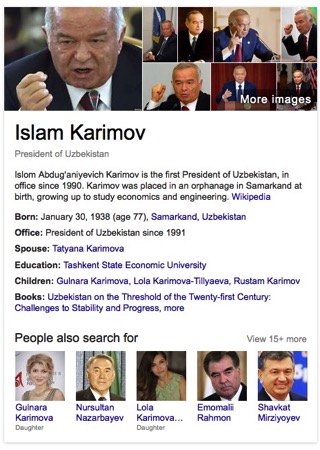 Islam Karimov is a lot of things and most of them not particularly attractive or desirable, however like most tough guys he loves his children, he has two! 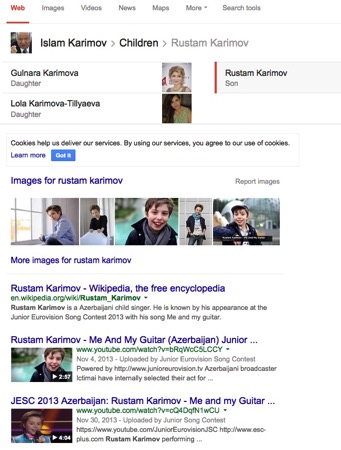 “Now isn’t that a little odd you fool Cat,” I can hear you saying because if you look at the extract from the quick search Google page above covering his children you will see that he has three, two daughters Gulnara and Lola and a son ‘Rustam.’

Odd then that ‘his’ son was born in Azerbaijan! And the only reason he is quoted by the confused Google search engine is that he has the same last name as the President of Uzbekistan, Islam Karimov and obviously in the brains of the Google search engineers comes from somewhere over there, where the countries names end in ‘stan’ or ‘jan’ and aren’t anywhere near as important as Google themselves.

And if you asked President Karimov about his son he would think you madder than the people who rely on search engines and online Encyclopaedia because he knows and very few others it would seem know that he has never fathered a son.

Lastly goodness knows what Rustam Karmimov thinks about being given a new father when his own is probably perfectly adequate, and worse a new father that is an ex-Soviet henchmen, or is that an ex-Soviet and still a henchman? And for 25 years has been boiling people alive, killing Uzbek journalists who are in hiding in neighbouring countries for criticising his regime and is not adversed to the odd massacre or two every decade or so.

Still it isn’t just Google that is causing so much illiteracy! When typing ‘Karimov’ I missed the cap key and got ‘karmic’ served by my Apple computer’s spellchecker. Oh how I weep for the future generations who rely on this inadequate software that abounds today serving us nonsense and adverts in equal measure!