A fishing village on the tiny Japanese island of Aoshima, which is located in Miyazaki province, off the southern coast of Japan has something of a problem and it has to be said that it’s really self-inflicted!

Years ago the fishermen and women of Aoshima used to complain about mice, they were over run by the pests, so quite reasonably they decided to introduce the most effective but humane, or should that be feline, solution. 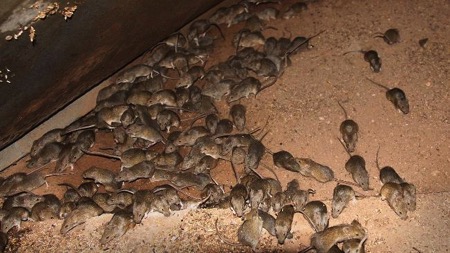 Cats are good at controlling mice and soon the ‘mouse problem’ was completely under control. But before we say well done to the heroic felines, we have to remember one thing and that is Cats do happen to be good at ‘other’ things, unless they are subject to some form of control themselves and in the case of the Cats of Aoshima that control should have been, ‘birth control!’ 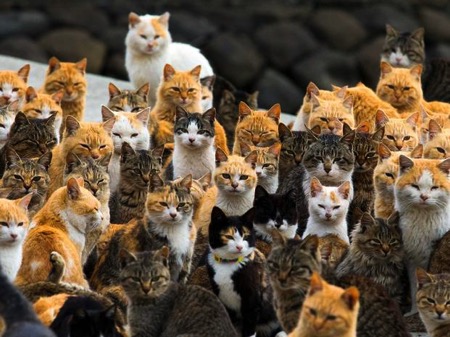 Sadly for the Cats as much as for the inhabitants of Aoshima the fishing industry in the area has declined and many of the people who looked after the Cats have left. over 70 years ago there were 900 people on the island, now that number has reduced to a mere 20! 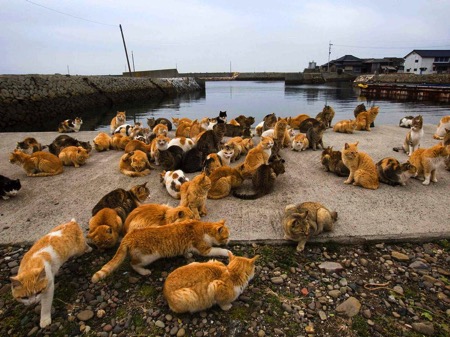 The sheer number of Cats on an island that could accurately be described in size as ‘modest,’ would be a problem in itself. That problem is amplified by the fact that there are so few people who are around to feed the Cats these days after they were so enthusiastically introduced years ago. And of course as Cats will do they have eaten all the mice and most of the other wildlife available.

Happily for the Cats of Aoshima they have allies. Hundreds if not thousands of people visit the island from the mainland these days just to see the Cats, these tourists apparently find over a hundred rather boisterous, if not pushy, Cats calming and bring them food.

Whether the tourists own Cats at home is debatable because the diet of the of the feral Cats now consists mainly of rice balls, energy bars or potatoes. “Energy Bars?” Yes I thought that was rather odd too! 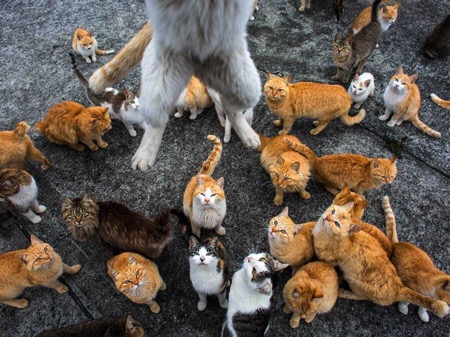 And as you can see these Cats rather like the camera and aren’t afraid of having their pictures taken. Mind you I don’t think these Cats are afraid of anything!

Apparently and rather belatedly, efforts are now being made to cull the feline population, roughly 10 animals have recently been spayed, but progress is slow.

This Cat finds this sort of disastrous human induced situation not a surprise because humans are really terrible at playing with nature… aren’t you?