Well dear cuddly readers it’s the beginning of a new year and time to get your life sorted out, or that’s what I have been reading in the newspapers and magazines one should do.

Apparently, according to a youtube style guru you can vastly improve your closet space by turning the hangers around! It makes getting clothes out of the wardrobe more difficult and as you fill up the newly available space I should imagine it will become impossible to wrestle any outfit away from the tangle it will all become, but let’s face it youtube ‘gurus’ don’t really care about ‘you’ they offer the tips just to make money.

There were so many other ways offered on youtube to improve my life that after looking at quite a few I started to believe that I was a very untidy, miserable mess of a human being. On reflection happily that put me off listening to any Horoscope predictions for the coming year and getting even more depressed.

Still I did find this advert in a shop window offering ‘improvement’ and thought that it might be perfect for those among us who need a lot of Plastic Surgery, although I believe we have to call the treatments either “Cosmetic Surgery’ or “Augmentation” these days, probably because Plastic Surgery has such a bad name!

Augmentation is frankly an odd word and as far as I know has nothing to do with carving up a person to make them look ‘better’ and I use that word loosely!

In music ‘augmentation’ is used to describe the lengthening of the time values of notes in a melodic part. But in Heraldry the word is used to describe an addition to a coat of arms granted as a mark of special honour. So far I haven’t found a reference to a boob job in any dictionary, so I imagine it is a word only used by charlatans who have moved on from terms such as breast enlargement or reduction.

It’s a funny old world we live in isn’t it? 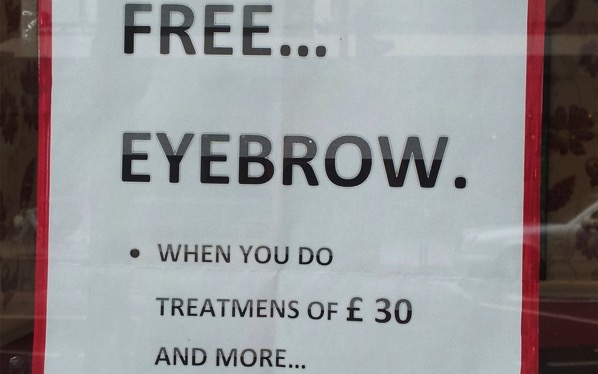