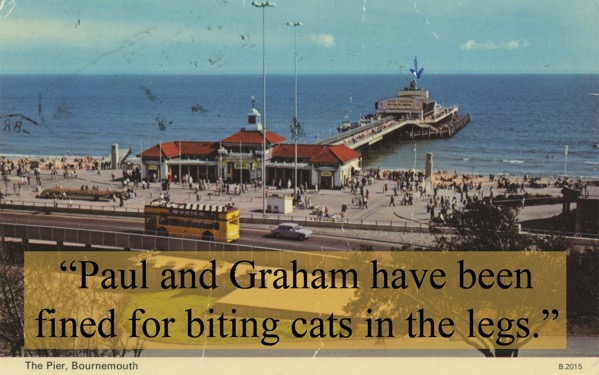 In the 1950’s and 60’s the British had their holidays at home, which as far as most of the destinations they would eventually package jet off to was a relief. Imagine a Spanish Hotel Manager’s life without complaints about the plumbing, the noise of local construction and the food?

Instead the British ate their full English Breakfast in a B&B and looked forward to a fish dinner at lunchtime and Steak and Kidney Pudding for dinner even when the temperatures were in the high seventies and they had to sit on the prom in their bras with their dogs sitting next to them.

It was a golden age, for a few, but for most there just wasn’t enough to complain about! Typhoo was in abundance and the food was “proper English.” As a consequence when the time came to write a postcard there was just nothing to say, “having a lovely, wish you were, weather is…” only tells part of the story, so when something happened you just had to related it in the section for your message which was as big as the area reserved for addresses.