Have you ever wondered if there is one organisation that is so powerful, so clever, and so canny that they advise every single international bank?

If you have wondered then you would be right and The Cat has managed to get a photograph, and publish it for the first time ever in any publication, of the offices of the geniuses who advised JP Morgan only recently and in the past have offered sound investment advice to such risk taking heroes of the financial world as Goldman Sachs, Citibank and well you get the picture…

Ladies and gentlemen, and of course my dear cuddly readers I give you CHANCY INVESTMENTS of Malawi honest advisers to the banking world, who’d have thought that the world’s entire banking system was run, and of course regulated, by such an august institution. 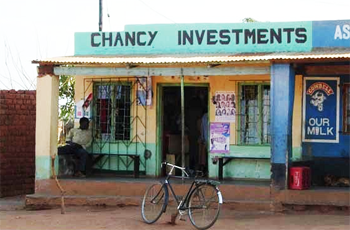