So here is another reason why the Scots should leave the union with England. 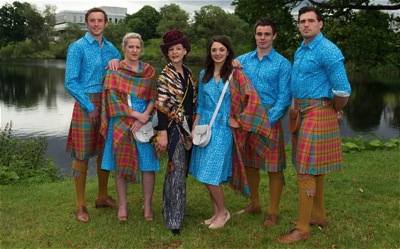 The picture is of the The Scottish Commonwealth Games Team Uniform hmm lovely! The odd person in the middle is the Scottish designer to blame for the outfits, poor love it must be a trial working as a clothes designer and being completely colour blind and have no sense of style.

Definitely A Woman But Drugged Out of Her Mind

Today it was confirmed that the Commonwealth Games women’s 100m gold medal winner Damola Osayemi has failed a drugs test, but happily for a change other tests confirm that she is a female athlete and was rightfully allowed to compete in a woman’s event, unlike a growing number of African athletes, particularly from South Africa, who have entered and won athletic events only to be discovered at a later to be men.

However with Damola Osayemi officials have definitely confirmed that she was indeed a woman, but in her case a woman who was drugged out of her mind.

Damola Osayemi’s coach and Nigerian team officials have said that the banned substance that had been responsable for her drastic improvement in form might have been ingested while poor Damola Osayemi was taking medicine for a really bad toothache.

Others have said that a disgruntled Witch Doctor may have tricked Damola Osayemi into taking the banned substance or indeed that she and her trainer had secretly used banned drugs to enhance her performance in the same way that Olympic athletes have been doing for decades because of the enormous financial rewards that come as a result of winning sporting events to say nothing of the muscle tone that can be achieved with steroids and of course the possibility of becoming a successful politician in later life.

The picture below is of a happy smiling Damola Osayemi thinking about all of the money she is going to earn from the sport over the next few years, after she won the 100 metres event and probably just before she was given the news that she had failed the all important drugs test.

For all of my American readers.

You may be wondering just what exactly is the “Commonwealth Games?” Well it is a rather poor imitation of the Olympic Games which attracts second division countries and their athletes to compete in countries that can’t afford to host the games and in the case of this year’s host couldn’t get the various venues and stadia built and ready even though they had eight years to do so.

The ‘commonwealth’ part of the name “Commonwealth Games” relates to a group of ex British empire countries who are convinced that if they huddle together economically something wonderful will happen to them, as they have been huddling together since 1931 it is unlikely that this will happen.

The importance of the “Commonwealth” and the “Commonwealth Games” to the British public amounts to zero except for a very small and completely out of touch group of free loaders who count among their ranks the Queen of England, Commonwealth etc and her dreadful spawn who get to travel to the countries that comprise the Commonweath and in the case of the really awful prince Charles (the grumbler in waiting) and the insane dude of Edinburgh whine and moan about the heat and humidity, the flies and of course the people.