On my meandering way around the world researching my latest unputdownable masterpiece of feline literature ‘The Cat’s Travelogue’ I dropped off in a lot of places, but then human cities, after a while, get very samey don’t they and frankly they could send anyone with as little interest in human activities (except Prawn fishing of course) to sleep.

One of the places I did stay awake in was Buenos Aires. I also felt rather hungry all of the time and unfortunately after I got back home I had to dump the entire chapter of my masterpiece of feline literature ‘The Cat’s Travelogue’ because it was drivel which was odd because at the time of writing it I though that it was amazing, and one of the best things I had ever written.

Thinking back to my time in Argentina I have a suspicion that all of the rambling drivel I wrote and my feeling of euphoria might have had more to do with the rather nice sweeties I became rather partial to while I was there!

Oddly enough when my supply was curtailed, after leaving the country, I was rather depressed for a while and even now a few years afterwards I still have the occasional craving for Crack Crocante. 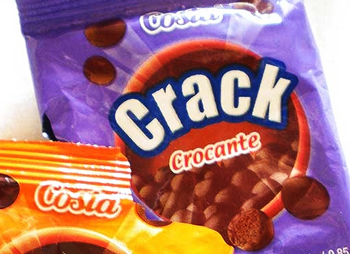 You don’t have any in your pockets do you? Just a little taste, that’s all I want, I’ve got Prawns!