Weather forecasters huh! They mention that it’s going to rain ‘later’and there is bright sunshine, they tell us that there will be heavy snow showers over the weekend and neither day provides an opportunity to use the snow shovel you went out and got especially.

Let’s face it weather forecasters just aren’t all that good at what they do, which is sad because when they tell us about the big one, Global Warming we find it so very hard to listen with a straight face!

So how would you respond to this weather forecast posted in an hotel reception in Burma, pack a plastic mac and smile? 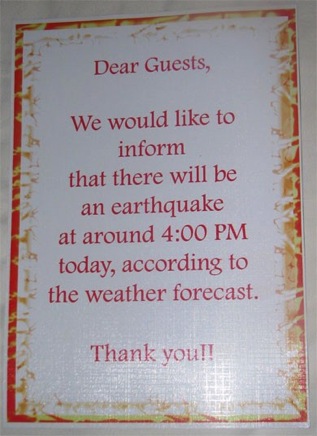 Unfortunately there was an earthquake that day, I wonder if anyone was prepared? Doubt it don’t you!

The plan yesterday was to get up nice and early, well 11.00 or so which is much earlier than we have been getting up recently and drive home. But there is one small problem with that plan. Can you spot it in the picture below?

Yes that is right whole Global Warming is frying other parts of the planet the Bohemian Mountains are covered in a blanket of all sorts of cold stuff. What a good job that this Cat has a glossy fur coat it is so useful when playing ‘where’s the road.’

So the delay in getting back to Cat World HQ means that we will just have to do a lot more skiing, partying and generally amusing and enjoying ourselves, sigh life can be so hard sometimes… I understand! 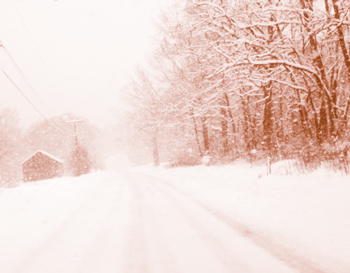 I heard today that there are several rivers in Europe that are frozen over because it is so cold, here if you are interested (in Prague where am currently) it is minus nine degrees C! Now I have no idea what that is in good old fashioned English degrees of cold, but I imagine that it could quite easily be described as “bloody cold” and very close to “Brass Monkeys” – ask me to explain the latter low temperature terminology at your peril har ha.

Anyway one could rightly describe Europe and, I believe, all sorts of other places where my wonderful book “Getting Out Excerpts From A Cat’s Diary” (still available at Amazon.com) is actually even more popular like the sublime US of A as icy.

So what is happening? Global Warming? Mmh me thinks not, correct me if I am wrong but doesn’t the title “Global Warming” tend to sort of suggest that we all should be clip clopping around in Hawaiian shirts, shorts and flip flops, well the humans anyway, flip flops just don’t suit me.

Oh I pray that the idiots like Bono and Al the Gore who have been going around getting fat telling us just how bad we are and how dreadful the planet is going to be because we didn’t clean the corners of our bedrooms properly, are wrong!

Sadly I don’t suppose they are and of course all the time they fly around the world telling us that we are all going to fry, they are proving themselves right, because they are adding to the pollution that they jabber on about so much. Its just that they are so… so… aren’t they, gosh even the Pope isn’t as holy as Bono is he?

Mmh now where is the point of this blog, what have I done with it, oh look there it is nice and safe.

So the frozen rivers huh? By the way -9C is around -16F or in other words very chilly and that is the beginning (again) of my point, it is cold, some say – well the BBC News and you believe what they say at your peril I know – the coldest winter on record and the records go back to around the 16th Century here in Pres Bush’s Old Europe.

If that is the case then just imagine this! The River Thames (in London for those who are geographically challenged) used to freeze over most years from the middle (sort of) of the 14th century until and get this, because it was news to me until I started to get interested in frost, (and don’t you say anything about having too much time on ones paws will you?) until the 19th Century and in fact that was the sort of ‘norm’ for most European cities.

Of course Bono and Al the Gore would be going around saying what we need is to to get all of the governments of the world together to spend vast fortunes inventing chemicals that would create a sort of umbrella to keep the heat in and they would probably come up with a great name for the effect of course and make a movie about it and ramble on about their ideas for a Greenhouse effect at every opportunity they could find.

Would you believe that in 1683 the ice on the River Thames was 11 inches or 28 cms thick in the middle of London and the North Sea froze for several miles out to sea unbelievably and the ‘great minds’ of the time happily kept their mouth’s shut.

And it was actually mild in London in 1683, in Frome in Somerset the ground was frozen to a depth of four feet and that says chilly more than anything you could think of doesn’t it?

So who thinks that we are in for what they called the “Little Ice Age” from the 14th century to the 19th century, well no one in their right mind of course and that is because the weather bless it is so unpredictable, can someone mention that to Bono and Al the Gore before they get us to worry ourselves to death. 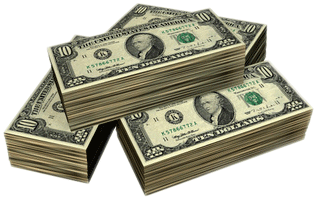 After 6 hours of talks today with our financial advisers we are now able to tell the world what they have suggested. The first suggestion is one that we have adopted immediately and that is that we advise all of our investors not to panic and remain calm or at least try to get control of themselves.

The advisers went on to suggest that there happily is a very simple resolution to this very minor hiatus in the liquidity of Cat World which is due in part to the enormous record beating amounts of money that we borrowed to launch Cat World, to say nothing of the rate at which we spent that money, happily all of these little setbacks can be resolved by borrowing even more money and that is exactly what we intend to do starting today.

With this sagely advice in mind we have launched the CW2F or Cat World 2 Fund which offers investors the opportunity to invest truly Madoffian amounts of cash secured against a 9th rights and share issue and our solemn promise that all investors will receive either their money back plus interest or a piece of some of the most exciting island and coastal real estate in the middle of the east, a place where they can retire in the sun and sand and watch the lagoon waters rising as global warming really begins to bite. Uh-ok!

Privately my advisers whispered to me – run Cat, RUN, as fast as you can! 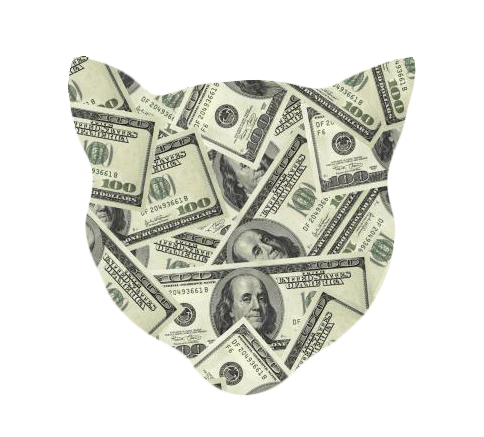 Yes that is right, all weekend I have been hot and not in my normally sexy way. I am boiling and fear that I have ‘Global Warming’ because I am hot everywhere.

What has happened to me I would like to know? Has someone de-forested bits of me that I can’t see? Am I in a carbon rich atmosphere? Will I get drowned in rising sea water?

Oh hang on a minute it is ok I have been sleeping in a patch of sunlight all weekend, I am surprised I’m not tanned.