Africa is beautiful, but tends to be spoilt by the politicians and to some degree people like ‘Mr. Special Edward’ who as you can see from the picture below is a cross between a witch doctor and a beautician, offering as he does “Secret Lady Buttock Enlaging Gel” that is of course Buttock Enlarging Gel without the ‘r.’ 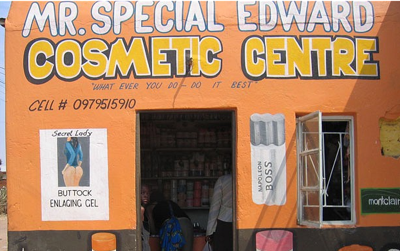 Sadly Africa is a beautiful country which is rather let down by it’s people, I have started to wonder if their collective leadership throughout the continent have something to do with it?

I saw this article and thought, yes of course it does!

The $5m (£3.2m) prize is supposed to be awarded each year to an elected leader who governed well, raised living standards and then left office.This is the fourth time in five years there has been no winner.

A committee member said the group looked “for excellence in governance but in leadership also.

So not even a large prize and a regular income for life can tempt good leadership out of any African leader! Wow!

Still I suppose if you are selling your country’s resources off to the Chinese and back-pocketing a small fortune or like Robert Mugabe just openly stealing the last bits of the country’s GDP that you missed the first time around then $5m and $200,000 a year for life is just not worth the effort of being a good leader is it? And of course if you look around the world at the collection of has-beens and soon to be has-beens who have governed other countries you realise that even if an African leader wanted to be a good leader able to win the Mo Ibrahim African leaders prize there are no role models, are there?