Usually if I see a sign that has been deliberately altered or ‘defaced,’ to be more precise, I tend not to include it in my little collection of silly signs but as it’s Olympics fortnight I thought I would make an exception for this bilingual sign. 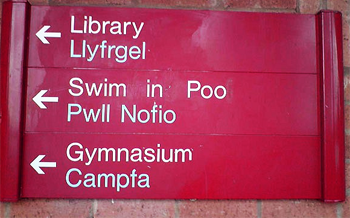 I believe that it’s also important to mention the Olympics today because Mr Cameron the Team GB Prime Minister has said that the Olympics should have a lasting legacy! Makes ten sound like the royal family for some reason – I suppose it is always because royalists are trying to justify their existence too when this last Diamond Jubilee Bank Holiday proved that the royals are a bigger waste of money than space by costing the nation several billion for an extra day off, and still they whine to give them a royal yacht, I just don’t get it do you?

Mind you he, Davy Cameron that is, did say all that Olympic nonsense at the same time as his government has announced that they will be getting rid of a lot of school playing fields, the very place where school age athletes train.

Still as more than half of the Team GB medal winners come from schools where rich parents pay a small fortune to educate their children in what the English call “private schools” these days and so that shouldn’t affect Team GB should it.

But sadly the mainly private school educated chumps in the Cameron government weren’t content with just snatching school playing fields, so that their rich buddies who donate to the party could build houses and industrial estates that will probably remain empty because of the recession, they went a little further and will sadly cancel the two hour cigarette break for school teachers who teach games and another subject.

All of which makes the sign above rather relevant because the UK as a whole and England in particular seems to be swimming in the very stuff it mentions – politicians who needs them?