There is something so satisfying about knowing that the world eventually catches up with ones thinking! As you can see from the article published yesterday in a very serious UK newspaper the world – at least the UK – is beginning to catch up with one of my particular pet subjects, the hyprocracy of people like Bono, the dreadful prince of Wales and so many more, but I will let you read the article for yourself.

It isn’t often that I reproduce someone else’s words but this correspondent from The Independent London wrote this piece on Wednesday, 15 September 2010 and I blush to say that she has taken the words right out of my previous blogs.

Yes Ms. Burchill, Bono, Fergie, Foorballers and their wives and of course the star of the show the Ever More Dreadful Prince of Wales are hypercrites.Here is what she says tee hee.

Hiding in full sight, it’s as though they believed those gimcrack ads about invisible capes in the back of the comics

I have many faults, but hypocrisy is not one of them. Thus, I’ve always been fascinated by hypocrites; indeed I examined the difference between a phoney and a hypocrite in this very column a while back, concluding that generally an old-school hypocrite knows what he is doing is wrong and seeks to do the dirty on the sly and holds his hands up when caught (Wayne Rooney), whereas a phoney pretends they’ve done nothing wrong but justifies it by some ridiculous psychobabble about being “in a bad place” (yeah, on the front page of the red-tops!) when bang to rights (Sarah Ferguson).

But recently a sumptuous smorgasbord of such flagrant hypocrisy has been laid before us that I feel a new category is in order: hypercrites, who combine the worst aspects of the hypocrite AND the phoney combined with some absolute lunatic conviction that NO ONE WILL NOTICE WHAT THEY’RE DOING. Hiding in full sight, if you like; it’s as though they believed those gimcrack ads about invisible capes in the back of the old-school comics.

Thus the high-flying poltroon Prince Charles lectures us about our carbon footprint while clocking up enough air miles to make a trolley-dolly dizzy. The Pope rails against the moral vacuum at the heart of modernity while presiding over the biggest paedophile ring in recorded history. Head honchos at the Government quango the Commonwealth Development Corporation live it up in Michelin-starred restaurants, kick back in five-star hotels and take £330 taxi rides from Brussels to Paris, out of the £2.5bn pot of public money set aside for fighting poverty in the world’s worst-off countries.

And now Bono, champion of the poor, has moved a good deal of the business of the “ethical” fashion house run by him and his wife, and set up to “encourage trade with Africa and celebrate the possibilities and people of the continent” from said Africa to China. No doubt to celebrate the possibilities of the sweatshops, long hours and low pay that’s SO a good look right now! 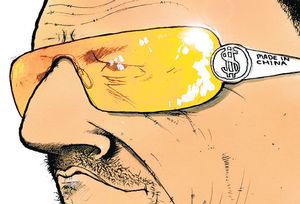 Of course, it’s only last year that Bono was accused by the campaign group Debt and Development Coalition Ireland of robbing the world’s poor by stashing huge wads of cash in a tax haven when the revenue might well have been used as overseas aid. “We wanted to raise our concern that while Bono has championed the cause of fighting poverty and injustice in the impoverished world, the fact is that his band has moved part of its business to a tax shelter in the Netherlands,” the DCCI said. “Tax avoidance and tax evasion costs the impoverished world at least $160m every year. This is money urgently required to bring people out of poverty.” But it’s still pretty rank.

And hearing about Bono made me think about Andrew Carnegie, as I do most days as I traipse along the street handing out twenties to beggars, hearing in one ear my accountant yelling “Julie – NOOO!” and in the other Mr Carnegie whispering “He who dies rich dies shamed”; my favourite saying EVER. Born in a one-room weaver’s cottage in Scotland, migrating to the US as a child, his first job at the age of 13 was as a bobbin boy, changing spools of thread in a cotton mill for 12 hours a day, six days a week, for a wage of $1.20. Soon after, he became a messenger boy at a telegraph company; he advanced through the ranks and then into the steel industry, where he made the fortune that saw him become arguably the second richest individual in American history, after Rockefeller.

But mainly, Carnegie gave money away – HE WHO DIES RICH, DIES SHAMED. Schools, universities, 3,000 libraries all around the world – my local library is a Carnegie library, and a beautiful thing it is, too – and pension funds for former employees. By the time he died in 1919, he had given away somewhere around the current equivalent of $4.3bn. His remaining $30m was given to foundations, charities, and to pensioners.

In the half-witted left-wing circles I used to move in as a callow youth, there was always this dumb theory that the rich over here were somehow better than the rich in the US because they had a sense of noblesse oblige. But it really is a bunch of eye-wash. Think of that stat that over here, the poorest people give the greatest proportion to charity, dwindling as one moves up the tax brackets; in the US, far more laudably and logically, the reverse is true. Think of that billionaire dude’s club, Bill Gates and his mates, whose brilliant circle-jerk generosity seems echoed here only by the amount of lectures the rich dish out to the poor, whether under the guise of greenery or government cuts.

WHY can’t a Euro-millionaire – be he prince or pop star – be more like a Yank? Just quit lecturing, shut your big wazoo and cough up! I’d like to say put your money where your mouth is – but then you’d have to stick it where the sun don’t shine, and who’d want it after that? HE WHO DIES RICH, DIES SHAMED. Deal with it!

Wayne & Coleen: Ladies – get off your rickety soapboxes

I’m starting to think that Wayne Rooney has done a far, far better thing than he has ever done by repeatedly sleeping with hookers. He is, unconsciously, telling his wife – who loved him when he was just a boy, not a brand – that he is not good enough for her and that she should get out now while she’s still young. Otherwise? The Catholic woman who embraces her suffering may well be a care-worn cliché, but if Coleen really fancies being a mater dolorosa, all the elements are in place.

And talking of sorrowing women, can we please have a moratorium on all the female newspaper columnists getting up on their somewhat rickety soap boxes and serving it seven ways to poor Juicy Jeni? “Young girls these days are whoring themselves to the highest bidder in search of a WAG lifestyle. When I was a youngster, we wanted to be something worthwhile like a teacher or a doctor – not rich and and famous,” goes the gist.

Then WHY, dear fellow female newspaper columnist, didn’t YOU become something worthwhile like a teacher or a doctor? Was it because, perhaps, you wanted to do something with low stress and decent pay? And to get your picture in the paper? Exactly. The Colonel’s Lady and Juicy O’Grady…

Medialand: Don’t do as I do – that’s the general rule here

Combining both these points, I can’t count the number of well-paid hacking jobs I’ve turned down because I found it somewhat duplicit, to say the least, to make thousands of pounds from an afternoon of condemning drunken, pleasure-seeking women on the streets of Newquay or Newcastle, knowing full well that when the day was done I would more than likely be drunkenly pleasure-seeking in the more upmarket bars of Soho and Brighton. But when I’d say to a commissioning editor “How can I condemn drunks, because I drink loads, too?” the response was deafening, to say the least.

Don’t do as I do – do as I why-oh-why is the general rule out here in Hackland. I love hacks, and I love being one, but their hypocrisy – particularly the women, regrettably, and particularly the female columnists – is one of the few qualities that revolts me.

There that is it – of course in the article Ms Burchill admits to having faults that, as far as I can see, is the only place where we differ.

To read more from my books, blogs and so much more don’t do anything else just click here – my wickedly wonderful website