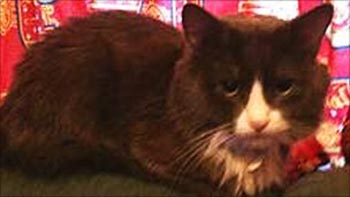 While Bandit’s family slept the brave 15 year old Cat from Lincolnshire in the UK, braved flames to raise the alarm that the kitchen was on fire and possibly saved his family’s lives.

Bandit braved the flames to raised the alarm by scratching his human’s face, Marie his human who then woke up her partner David and his two daughters and then with with Bandit, four other Cats, four kittens and two dogs as well as hamsters, gerbils and rabbits managed to get to safety outside as the blaze raged.

The Fire Brigade were called and promptly and efficiently as usual bravely brought the blaze under control.

Later when they learned of Bandit’s bravery they said “If the Cat hadn’t woke you up, the occupants of the house would have died from toxic fumes and smoke.”

Happily that is not the case and thanks to Bandit all of the 20 occupants of the house escaped unharmed.

As you can see from the picture Bandit is a shy cat who really doesn’t like having his picture taken and frankly was wondering what all the fuss was about, all he wanted to do was to get down on the floor and check for Prawns – the usual reward for clever Cat’s.

Animal lover Marie proudly said that “Bandit is a very intelligent Cat although I didn’t expect him to do something like that, which I am amazed by. He can actually talk. He can say things like ‘hello’ but people don’t believe me he can talk.” 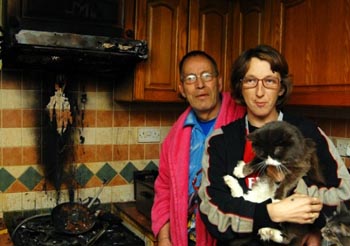 Sadly the family didn’t have insurance and will have problems renovating the rented property they live in and replacing the ruined appliances in the kitchen which was badly damaged by the fire.

Happily for them and for Bandit after the brave men and women of the Lincolnshire Fire and Rescue put out the fire and they then installed smoke detectors which means that Bandit will have some help if something happens like this again.