It is very hard to be ‘royal’ just ask Camellia Parker Whatsit – the Cat’s ‘Queen of Pies’ and prince Charles’ ‘consort’ and I am using the word ‘consort’ as a polite way of describing someone who has been having an affair with a married man for years, here! I believe in days gone by the courts would have described her as a “co-respondent.”

The main reason it is very hard to be a royal is that you really don’t need a lot of intelligence to be a royal family member and never have it is sort of an English tradition that their monarchs and their families are very stupid – for more information do take a close look at prince Charles and what he has said and done over the years.

Here, the future queen, if Charles gets his way and there’ll be trouble if he doesn’t (yes he is ‘that’ spoilt), is demonstrating the art of being a member of the English royal family perfectly and offering you an insight into that age old question. “How many fools does it take to put up an umbrella?” 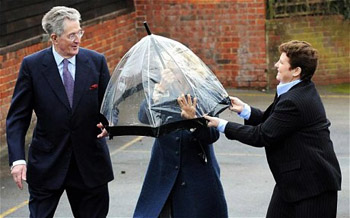 Personally this Cat thinks that the old girl fits into the ‘firm,’ as the royals like to call their enterprise, perfectly and proves that it is time for a republic, at least then after a ‘term’ the English could boot out any losers and not have them hanging around embarrassing most of the nation for decades.