Ok so Russia is fabled for its high level of Vodka consumption but very sober air traffic controllers in the cold east of Russia recently claimed that they were ‘buzzed’ by a UFO travelling at 6000 mph – yes ‘6000 mph.’

And (it gets worse) when they spoke to the pilot she replied “with a female sounding alien voice in a language that was unintelligible but sounded Cat-like,” said one air traffic controller who probably needed at least a double Vodka or five to calm his nerves.

The Cat has decided to call out latest extra terrestrial visitors ‘Catliens’ and hopes that they are just a little more interesting and indeed ‘real’ than ET, who made one great movie but was never heard of ever again! Makes you wonder what Steven Spielberg did with the poor little guy doesn’t it?

The speed of the craft is almost as exceptional as the language of the pilot – what a shame I wasn’t there to translate, maybe I will be called into act as a consultant now that would be a nice little earner wouldn’t it – because it was travelling so fast. If you earthlings look here on Wikipedia you’ll see that the fastest manmade aircraft, the rather terrifying looking, Lockheed SR-71 Blackbird #61-7958 set the fastest time every by a man made jet on 28th July 1976 of 2,193.2 mph while being flown by Capt. Eldon W. Joersz and Maj. George T. Morgan. 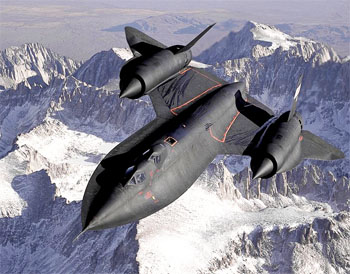 The UFO was assigned a numerical code on the Russian radar of 00000 because the air traffic control system could not identify the aircraft and it can be seen clearly in the picture below flying straight towards the capital of the region Yakutsk. On the picture below I have circled the ‘object’ in red so that you can see it easily! 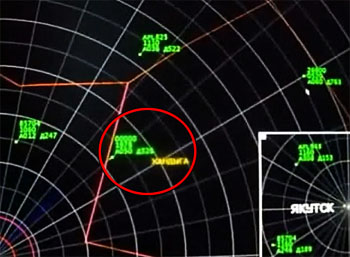 The air traffic controller told a passing Aeroflot pilot “I kept hearing some female voice, as if a woman was saying mioaw-mioaw all the time.” Unfortunately as you will hear on the video, which I have
posted on my www.wickedly wonderful website’s new video page my new Video page the air traffic controller’s contact with the Aeroflot pilot was disrupted by interference from the UFO as though it was jamming it – ‘da dah da’ sorry that is not a lot of russian ‘yes’s’ it is obviously a musical accompaniment to a significant fact!

Last night there was no comment from airport officials on the Catlien UFO contact, the video or indeed anything but then we were talking to Russians, which is odd because although the video has only recently come to light it was made some time ago (and surely they would have had time to get their story straight wouldn’t they?) because you can’t see any snow outside the control tower windows and currently Yakutsk is covered in the stuff with an air temperature of minus 30C and that is how it will be for eight months of the year.

Of course some experts, and frankly some people who are totally the opposite, claim that it is widely known that UFOs have made contact and landed on Earth but details have never been made public, is this the first time we, the more general public have made ‘contact?’ Actually that would be nice because ‘Contact’ was a great movie and little what’s her name who starred in it hasn’t really worked since, no let me correct that she hasn’t done anything as good since ‘Contact!’

Oh by the way I thought that I would mention that when I do chat to the other super intelligent Catlike beings I will put in a good word for most humans, but of course a Cat has to live (preferably in luxury) and if anyone feels like chipping in with the expenses then now, I strongly recommend, is ‘the’ time because you’ll go to the top of my list.

If you want to know the things I like you could do some research by reading my book Getting Out – Excerpts Cat’s Diary and you can get it here Amazon.com or you could read my www.wickedly wonderful website www.thecatsdiary.com and of course it should go without saying that you must make sure that you get my next book which should be in the shops very soon it’s a brilliantly written ‘Travelogue.’

One thing I can assure you earthlings of is that, as yet, I haven’t travelled away from our planet, that is the planet that will belong to Catkind very soon of course it used to be called Earth though as yet we Cats haven’t actually agreed on a new name for our planet.

I can assure you it definitely won’t be called ‘Planet Fish’ as Dave the Cat suggested. He is more annoying than usual after eventually grasping the fact that the new overlords of the earth will be err… us and now keeps making buzzing noises and has stuck a wire coat hanger and two knitting needles into the top of his woolly hat and keeps repeating “I am an alien give me your fish earthling!” Then he throws his wonderful toy Space Rocket, which he got here from my friends at Mad Cat Toys, into the air and whistles like a Pig – or is it more like a Banker – I can never tell the difference.

If you want to do the same as Dave the Cat or just own one of these wonderful toy Space Rockets then do please click the little link that rather convenient says “Mad Cat Toys” on my blog and you will be whizzed there to choose your Space Rocket and more and I’ll get a very small ‘consideration’ for sending you there which is nice isn’t it?

Or if you can’t see the nice little logo of a Mad Cat then click here blog.thecatsdiary.com and you will be taken to my blog’s main page and “hey presto!” As magicians say when they are annoying Rabbits – you will see it!

If you want to see the whole Catlien experience do click here and watch the video on my www.wickedly wonderful website my new Video page where you can actually see that the UFO is travelling at a much faster speed than any of the aircraft nearby.