Petrified postmen are currently refusing to deliver mail to a house in Peterborough, UK, after being repeatedly attacked by what some describe as a terrible unseen sharp clawed monster which lies in wait for them behind a front door in a normal suburban street which roughly translated from Postman speak means a tiny Cat.

3yr old Snowball actually stands a ‘towering’ 10 inches off the ground (on two paws) but don’t for goodness sake tell him he isn’t that impressive when he’s rearing up to his full height, rather than being what his owner describes as ‘harmless and playful’ because Snowball might scratch your finger as he does when an unsuspecting Postie who posts letters through the door.

Bearing in mind just how ‘harmless and playful’ Snowball’s owner believes him to be, imagine how shocked he was to get a letter from the UK’s Royal Mail telling him his little pet was a ‘health and safety risk’ after a postman’s finger was scratched while putting mail through the letterbox. The Royal Mail letter went on to claim that Snowball posed an ‘unacceptably high level of risk’ and was a ‘potential hazard.’ Bless him!

The long letter explained that 3 postmen had been attacked and one poor postie had suffered ‘quite deep’ cuts to a finger after delivering to Snowball’s home in Peterborough, Cambridgeshire, UK.

Trying not to laugh as he read the letter Snowball’s owner discovered that following a complaint by one of its staff, The Royal Mail conducted a health and safety assessment and decided, in their opinion, that it was just too risky to deliver post to Snowball’s house any more.

The Royal Mail’s officials said deliveries would be suspended until Snowball’s owner finds a way to stop Snowball mauling its postmen or an ‘alternative safe delivery point’ is put in place.

Currently as you can see below Snowball is still waiting for a postman to pop a letter and a finger through his letter box! Tee hee! 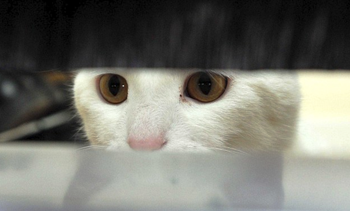