Recently a collection of stupid humans tried their hardest to give us felines, well one of my bigger spotted brothers, a bad name yet again by being, stupid, very stupid and then even stupider!

Imagine the scene in Kagga Kamma game reserve, Port Elizabeth South Africa, acres of wild landscape and even wilder animals that you can annoy in a Landrover by spending hours driving to gawp at the occasional tail, smear of fur whizzing past and so on.

If you can’t imagine here is a picture to help you! 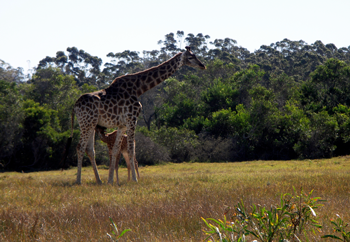 It must be frustrating for the Kagga Kamma game reserve staff and owners that they can’t provide more of an up close and person experience for the intrepid humans who want to trek in air conditioned comfort to take out of focus pictures of what might be an Antelope’s bottom or a Lion’s unmentionables.

So when Mark and Monty were neglected by their mother who probably got tired of sharing her reality with so many viewers as if they were in some sort of Big Brother show in Khaki she decided to run away leaving two adorable Cheetah cubs which the Kagga Kamma game reserve hand reared.

All that was required was to dump them in a ‘petting zoo’ area, and let’s face it a chicken wired compound is cheap and the flooring grows naturally if the visitors would only stick to the path, and so the Cheetah Petting Experience was conceived or is that ill-conceived?

For four years as Mark and Monty grew up they endured any number of fools and their children who would interrupt their naps by stroking, prodding and making so much noise until one day a drip and her video camera wielding husband became the straw that would break the long suffering Cheetah brothers patience.

The fools in question were Mr. and Mrs. D’Mello who were on holiday in South Africa from Aberdeen, the holiday being a 60th birthday treat for Violet D’Mello, with Mr. D’Mello filming every moment they entered the Cheetah Petting Area (just the name suggests trouble doesn’t it?) accompanying a family with young children. 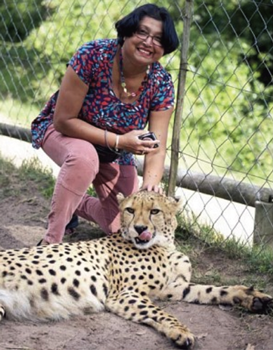 I have to say that Monty looks a bit peckish doesn’t he?

For some reason best known to the parents of one of the children one of the Cheetahs, no one seems to know whether it was Mark of Monty, but one is named after a very famous and not particularly competent general, grabbed a seven year old girl and unfortunately did what Cheetahs tend to do with prey luckily leaving just a few cuts on her legs.

Quite rightly, some would say, the girl’s brother started running towards the enclosure’s gate to get away from the ‘wild’ animals, doing I am afraid what will do if given the opportunity, like oh say for instance finding themselves locked up in a small enclosure with what is to them ‘prey.’

Although no news report I have read mentions screaming, shouting and any hurling of stones (at the Cheetahs and not the other way around of course) this Cat imagines that there was a lot of that sort of thing going on, as Mrs. D’Mello for reasons best known to herself grabbed the girl’s brother to stop him legging it towards the gate and freedom and one of the Cheetahs turned his attention on her.

When Cheetahs hunt they knock their prey to the ground, usually after a bit of a very high speed chase, on this occasion Mrs. D’Mello and the Cheetah dispensed with the chase and landed on the ground with a bump.

After a Cheetah has brought its prey down the next thing on their list of ‘to-dos’ is to bite, scratch, graze and gouge the prey’s head using their amazing powerful to say nothing of sharp, claws and jaws, Mrs. D’Mello by all accounts was only subject to some grazing and gouging getting off lightly in my opinion as a Cat.

After what must have seemed like ages, especially to Mrs. D’Mello, a park attendant arrived on the scene and tried to pull either Monty or Mark off here head, while – yes you guessed it didn’t you? Monty or Mark was pinning her to the ground and biting her legs.

Where was Mr. D’Mello all of this time, you may well ask and the answer is simple he was filming all the time, so that I imagine, they have something to show the grandkids when they get back home after the holiday which they decided they should continue, suggesting that the injuries to Mrs. D’Mello’s head were not serious and this like most stories in the press these days is more than a little pumped up, like a anecdote on steroids!

Mrs. D’Mello was ‘lucky’ according to Cheetah experts, presumably not based at the Kagga Kamma game reserve who probably would never put adult Cheetahs and humans no matter how big or small in the same small enclosure and definitely not encourage petting from either side, she suffered injuries to her head, stomach and legs and had stitches, the Cheetah experts mentioned (though whether that was within Mrs. D’Mello’s hearing or not no one knows) that Cheetahs usually only aim for the stomach so that they can disembowel their prey.

In my considered and considerable opinion it is such a shame that humans have so many zoos, television programmes, animated cartoons and movies which show wild animals as loveable, and cuddly we aren’t, animals especially ones who have not chosen to live indoors like Dogs and occasionally house Cats are wild dangerous and tend to view anything that is weaker than them and in this case I am talking about humans, as dinner or at the very least possibly dinner after a bit of a fight. 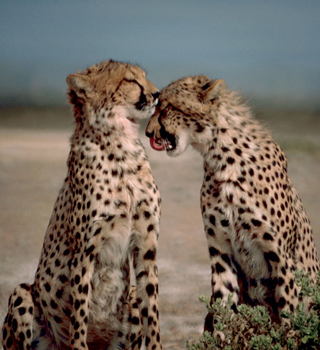 Cats (like me) are dangerous and the best thing you can do is to leave us alone, think of us as Bulls if you want to remind yourself how dangerous we are, we look cuddly, soft and gentle (oops the Bull analogy is evaporating bait but stay with me please) but if you stroke us and we don’t want to be stroked then we will demonstrate just how wild we can be!

In fact I think that the staff at the Kagga Kamma game reserve agree with me, if you take a look at their home page here Kagga Kamma game reserve home page you will see at the top of the page a very pissed off Cheetah, now I am not saying that the picture is of either Monty or Mark but it tends to show that they might not actually believe what was said in their official comment that they thought that neither Monty nor Mark were dangerous because they had been hand reared and over four years had received ‘dozens’ of visitors in their enclosure without anything unfortunate happening.

However Portland Oregon resident Michelle Bodenheimer might disagree with the ‘official’ version of the lives of these two young and very boisterous Cheetahs she was mauled by an 18 month old Cheetah cub while at the Kagga Kamma Game Park in South Africa three years ago when Monty and Mark would have been err… cubs – naughty boys!

Obviously the only defence that the good people of Kagga Kamma game reserve have is that it is a commercial adventure which offers the general public the opportunity to experience “A Wild Animal Kingdom” and if you don’t read the small print then you are just stupid aren’t you?