Most signs in the world have little or no value (except comedic) and therefore should be ignored, but and it is a big one so I will say it again but there are some signs that should be read, understood and their advice, instructions followed to the letter, one such sign is the one below which appears in Florida. 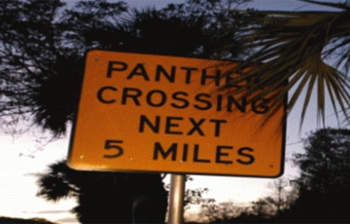 The reason why the sign above is so important is simple, simple maths, which I know most of you humans aren’t that good at, so I will type slowly here!

There are only about 160 adult members of the species known as the ‘Florida Panther’ in the world, well in Florida (as the names suggests) alive today and the reason why there are rather a lot of signs announcing that drivers should be on the lookout for Panthers crossing some roads is because more than one third of all Florida Panther deaths recorded last year were from collisions with cars.

Now everyone knows that animals, and in this case a certain Panther based in Florida not only can’t read but also have no road safety training, so it’s important that humans in their cars show just a little of their common sense and slow down on the stretches of roads where signs like the one above have been installed, it would mean an awful to Florida Panthers and save cars from being badly dented and their drivers from having a traumatic experience.

If cars and more importantly humans slowed down then the poor little Florida Panther kitten below would be not only safer but in his case be able to frolic about like a err… um… ‘kitten’ and do stupid things with his brothers and sisters, but sadly instead of this and because of some clown in a car this little chap has been left strapped into a full body walker and crying for his brother who died from his injuries when he was hit by the same car. 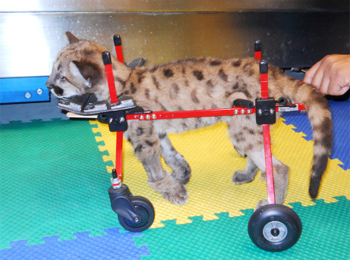 Worse still for this sad kitten who is being treated for his injuries at Tampa’s Lowry Park Zoo, no one knows if he is going to survive and if he does will he be able to walk and one day return to the wild, and not to labour the point too much but after all of his suffering assuming he manages to get healthy and go back to the wild whether he will just get knocked down again by a car, just because some moron in a motor needs to get somewhere 2 minutes faster than they would if they drove at a speed which would allow them to spot Florida Panthers and their kittens crossing the road. 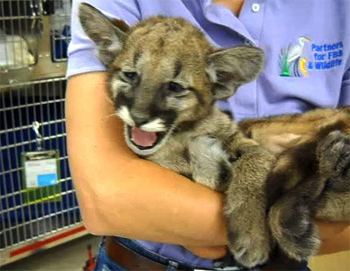 So what do you say drivers of Florida, and in particular those drivers who use the roads in the district around Naples, can you slow down and not only look out for the signs that mention quite clearly that one of the rarest and most unique species of Cat in the world and their even rarer kittens might be strolling across a road in front of your car and really would prefer not to be a pile of something nasty on the kerb, so can you slow down please when you see the sign at the top of the page or the one just below this plea. 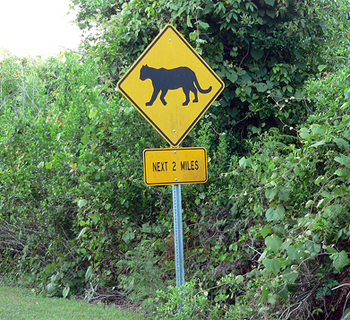 And then if you do slow down little chaps like our friend here, who is taking forty winks after exhausting himself trying to move around in his full body walker all day, might just live to grace the landscape in Florida. 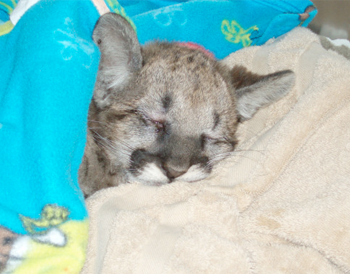 What could be better than in a few years time some intrepid photographer manages to get a picture of this kitten now fully grown and living his life in the wild? No actually what could be better is that this blog had never been written and the little chap and his brother never hit by a ‘human’ not a car, it’s humans who drive cars after all, and that could be the case if everyone driving around Naples just slowed down, surely these drivers wouldn’t speed across school crossings would they? 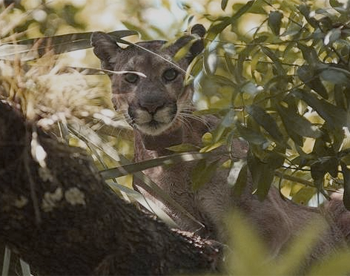