They say that church is a place for all and this church in New Zealand proves the rule even though the “fishy smell” must offer worshippers something of a challenge. 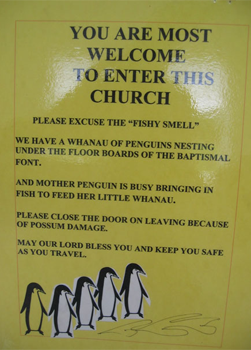 Obviously there is no room in heaven for the anti-social including Possums and quite rightly too!

So all this Cat can say is that he hopes that the Penguins grow up to be model citizens and the Possums mend their ways.

For those of you who are curious to know what the word “Whanau” means and are too lazy to look it up, or tired of getting adverts instead of results from your Google search, here is what I discovered, though I haven’t managed to find a New Zealander to check the translation with – just like trams there is never one around when you need one is there?

Whānau is a Māori language word for extended family. The letter ‘ā’ is obviously difficult to find even on an ecclesiastical word processor! Apparently a number of Māori words like Whānau are now becoming popular in New Zealand and entering the language unlike words from languages like… oh say Welsh!

I have a feeling that Whānau is not a word that is going to catch on globally like say a lot of black American words such as ‘hood’ (neighbourhood), ‘grill’ (some sort of mysterious device that sits on clenched teeth made from bling), ‘gangsta’ (armed children on street corners who emulate their elders) ‘bitch’ (a ‘hopefully’ beloved wife/girlfriend) and so on and so forth.

It does seem a shame that some words cross into the mainstream vocabulary and some don’t!