It’s minus three outside and I am writing to you from the heart of our snow bunker. We have enough tinned tuna and frozen prawns to last for just another four days and then I am afraid we might have to look at each other in a different light and start to really worry about anyone who offers an ‘invitation to dinner!’

Still there’s one consolation and that’s that the whole of Europe is tucked up shivering, under the same white blanket of course some countries are old hands at deal with the pesky white stuff and then there is the UK.

To be honest I love this time of year if I am watching the scene from a second floor window, because where I live in Europe at the first sign of snow thousands of people in brightly coloured warm clothing dash about the streets clearing snow, while their colleagues hop into extremely large snow plows for the roads and much smaller ones for the pavements and race around with orange lights flashing on top of their cabs clearing the snow from almost everywhere it is so colourful and so relaxing to watch others work.

Of course being English I had never seen this sort of activity before and as far as I can tell from the reports the the English newspapers it still doesn’t happen even today in modern Britain as they call it these days, for reasons best known to themselves. Instead you get wild stories in the English press of “Tens of thousands stranded as heavy snow and ice set to continue until Thursday” (it’s currently Monday), rolled up with flight cancellations at Heathrow airport one of the busiest airports in the world that can’t cope with a few flakes of snow.

Really what is it with the English and snow? As you can see from the picture below taken yesterday they haven’t had ‘that’ much snow and the country is “doomed” well according to the press. 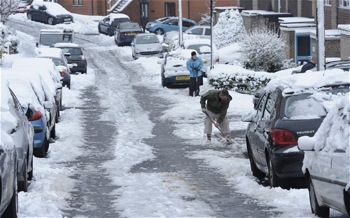 Compare this to a typical and I have to say not very remarkable picture of a snowy street taken the other day in Prague and you have to wonder what the English are so concerned about and why so many of them are sliding off the roads in their cars. 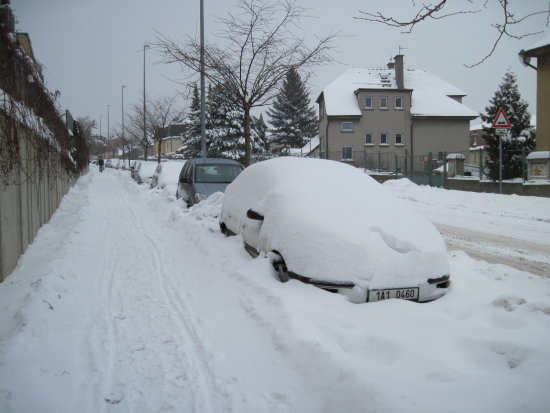 I do have one suggestion about the sliding off the road, from 1st November to 31st March each year winter tyres are as the Ministry of Interior of the Czech Republic (and most other European nations)here declares “obligatory.” The law actually states that “The obligation applies also when the drivers can expect .” And I suppose as thee ordinary driver in the street has about as much of a clue as to when to ‘expect bad weather conditions’ everyone here fits Winter tyres in the run up to 1st November, if you don’t and you forget then you get fined, but the fine is no where near the cost of having a tow truck come and rescue your stranded car and then to have it fixed, but isn’t that sensible?

I think it is and obviously not something that the English would do but then it would seem that they don’t like being in Europe and are trying to wriggle out silly sods.

I promise to post a blog later that shows some of the illustrations from this excellent book which was created for all ages.