The English like to think that they have some of the best history in the world and that alone should be enough to entice loads of tourists to spend far too much money visiting what is essentially a rather tatty run down country full of some of the poorest people in Europe.

One of the ‘treasures’ of England is the Royal family which comprise some of the wealthiest people in Europe who occasionally are persuades to perform for the tourists and their supporters. These performances take the form of ‘events’ and are spread through the year so that attending doesn’t interfere with the Royal family’s holiday arrangements. 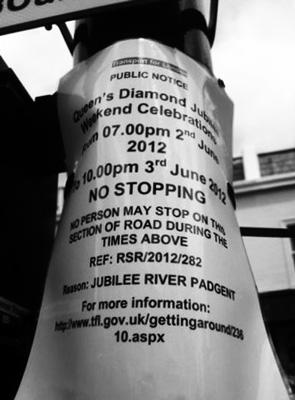 On odd occasions there is a big costly event arranged to mark an anniversary, these expensive ‘events’ are paid for by the overburdened taxpayer, the most recent was the queen’s diamond jubilee, in days gone by when the royal family meant something to the majority of the English population these events had some point now even the authorities are less than enthusiastic because of the problems caused to traffic flow and a Pageant becomes a “Padgent” whatever that is! Funny how transport for London managed to spell “NO STOPPING” correctly!