As any mother to be can tell you when you are shopping for your new off-spring life can be difficult especially when you live in London and are the size of a cuddly Hippo. Public transport and the (not very) ‘good’ people of London can, and regularly do, make life difficult and don’t even get me discussing parking wardens, and that fact is true, oh except for the royals as the picture below demonstrates. 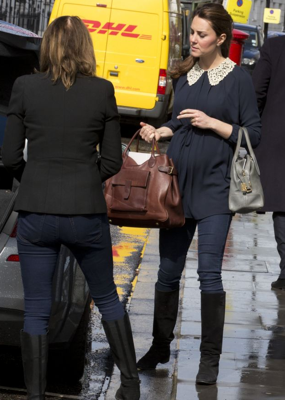 If you just happen to be born with a silver spoon in your mouth to say nothing of enormous family wealth and estates, or you have been living in sin with a royal and eventually decide to marry him then life is so very different. Before you pop out to the shops the London police will suspend all of the parking bays in front of any of the shops you decide to visit and ordinary people will turned away while you are gracing those shops in question, even if you don’t buy anything.

To my way of thinking this sort of behaviour is just not very 21st century is it? Why should there be one law for some people and one for all of the others?

Mmmh the spellchecker suggested that I might like to ask “Why should there be one law for some people and one for all of the Otters?” And I think that is a valid point, though hardly relevant here tee hee.

But seriously you have to ask yourself, ‘what has this woman done’ to be given such special treatment? Is she a leading peacemaker, a top politician, someone who has achieved something in life’ and the answer is NO! Much to the embarrassment of all concerned she has appeared topless in newspapers around the world – which was awful and not even apologised to the British public who pay for her extravagant lifestyle, she has as I said above lived with a royal and then held on long enough to get married to him, although he seemed less than keen, and now she is pregnant, gosh! I hope my kittens achieve more than that!