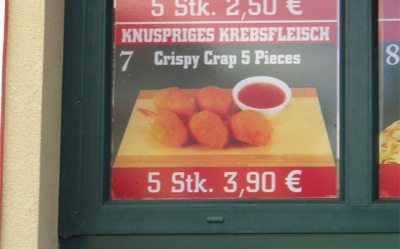 What sounds worse? “Knuspriges Krebsfleisch” or “Crispy Crap?” Hmm after all of the trouble I get into I think I will let you decide dear cuddly reader.

Oh ok I can’t help offering one observation about the Germanic languages and that is that anything they put on a menu sounds perfectly awful like ‘Krebsfleisch’ for example.

But between you and me there’s worse, Currywurst comes to mind and it’s one of most popular fast foods in Germany as does ‘Grünkohl und Pinkel’ which roughly translated is ‘Green Cabbage and Piss Sausage,’ and even worse if you accurately translate it because the word ‘Pinkel’ in this form comes from the Low German word for ‘Mastdarm.’ And yes dear cuddly readers, the lovely word ‘Mastdarm’ can be translate as ‘rectum’ and so you end up with the delightful sounding dish of ‘Green Cabbage and Rectum.’ Yummy!

I could go on because the German language reads like something thought up my hysterical idiots and therefore creates words to describe food and all sorts of other things that are madder than mad.