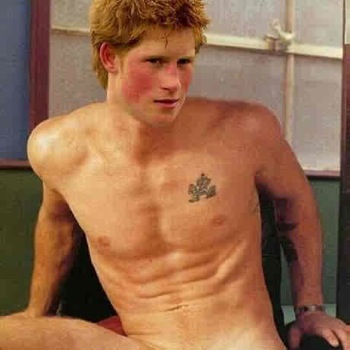 Ok we have all been here before haven’t we? A member of that sad, discredited and failing British institution the royal family caught with his trousers down and I am not talking about Henry VIII who was a master when it came to waving his royal naughty bits around. Which incidentally just goes to show that in 486 years they haven’t learned their lesson – talk about slow learners!

I had to laugh at a headline which I saw today in the online edition of the Daily Telegraph “Prince Harry faces ‘dressing down’ from commanding officer” I wondered just how much more ‘dressing down’ the fool among princes can achieve – see photograph above which looks as though it has been cut out of a gay magazine – “not guilty!”

Which all goes to show that the royal family and not just the royal wand wavers should be got rid of and quickly. The royal family obviously believe that they are just as entitled to the atrocious behaviour of ego maniacs today as they always have been like oh to name but one Henry VIII who of course changed the religion of the country to get a girl to say “yes!”

Oh by the way apparently the punishment that will most likely be levelled at the naked prince for shaking his stuff and being daft enough to do that in a room full of naked drunks is to have to donate his wages to charity! Now that would be a real punishment if he was a real soldier, but being a pretend part-time soldier and a real playboy who’s suite next door to where he gate crashed a hen party and stripped off cost $10,000 a night.

Which beggars the question, how do you punish these idiots with more money than sense? You could just stop them in their tracks, strip them of all of their wealth and then rent them out to the rich who need a token royal guest to really get that party started.

Mind you I don’t suppose that the Duke of Edinburgh does that sort of thing anymore and when he did at least he did it in the room next door to the Queen’s bedroom (apparently) and the Queen – well did you see her face in the TV cameras during the Olympics, most heads of state would have killed to have done what she was invited to do, but she didn’t crack her face and smile did she?

Oh and by the way just how much leave from the military has prince Harry managed to accrue? He had time off for most of the Olympics and still enough leave to party his way across America – why does the British Military have to put up with these royal fools?

It must cost millions to protect the royals even when they aren’t anywhere near the frontline and if I recall the Royal Navy had to give prince Charles a ship to command at the end of his naval career because he whined so much! Happily they found him an 18 year old minesweeper that no one was too worried about if he spilt his Gins no the furniture or clipped a dock wall or two here or there!

Funny how after just five years of service in the Royal Navy which ended in 1976 the fool was made an Admiral in 2006? Which begs the question – what the f**k?

Get rid of them and do it soon. The royal family make Britain look like a laughing stock.

Reports (and oddly enough very sharp pictures) are coming in to Cat World HQ that Queen camilla, “our queen of pies” as the mob now lovely call the chubby camilla the Duchess of Cornwall because of the weight she has so gracefully gained since she became an honest woman and married charles, and her husband the once and future king charles were attacked last night by a mob of hungry students.

Apparently students were tipped off by the British media, who needed a good picture story for today’s editions and in addition some outrageous table thumping moral editorial, that the ‘queen of pies’ and her prince were going to be attending yet another charity show where they get the free tickets and the champagne on the understanding that they rub shoulders with the commoners and plebs, who have paid thousands of pounds for a ticket, for as short a time as possible.

But last night the regal free jolly went wrong and the heavily armoured Rolls Royce car paid for by the royal loving British taxpayers and the other equally subsidised cars in the royal convoy were attacked and horror of horrors paint was thrown!

As readers of my blog can see – inside the royal car there was absolute panic from the regal couple and camilla was heard to scream “they’re trying to steal our Pies!” In the picture ex-naval captain prince charles can be seen being defended by the queen of pies who hold several honorary military appointments including Royal Colonel of the 4th Battalion of The Rifles and the rest in a list below* all which of course are unpaid positions but do carry hefty expenses for the organisations concerned which are of course in turn funded by the ever poorer British tax payer. Some on lookers say that prince charles retaliated and screamed at the mob after he had recovered some of his composure “get your own pies you filthy swine, there are our pies!”

After the attack the Metropolitan Police Commissioner said that no one had been injured and that was mainly because the press had failed to warn the London’s Metropolitan Police of the impeding attack, he went on to say that “had the press informed the police they could have had several thousand stick wielding riot police on hand to deal with the students efficiently and effectively – as I discovered on a recent trip to China whacking students and other protestors definitely beats catching criminals for a living and helps to ensure the rule of law!”

Comments and wishes of sympathy have yet to come in from all around the world however the Chinese Vice Premier Mr Li Keqiang was reported saying after he heard about the attack that “if people allow the Nobel Prize organisation to criticise China then this cruel attempt to steal an old woman’s pies, just because she lives off state handouts that others aren’t entitled to, shows how the rule of law is breaking down in the west; 19 other countries including the great friends of the royal family Saudi Arabia and Kazakhstan immediately issued statements agreeing with what Mr Li Keqiang had said.

Some time later charles’ father the rarely seen, secretive and mysterious ‘Dook’ was reported to say that “the idiot (we believe he was referring to charles) hasn’t got himself into a scrape with another bit of fluff in a car has he?”

The ‘Dook’ then rambled on as he was led away however this reporter thought he heard the words “still the good news at least with this one we don’t have to deal with the frenchies, nasty swarthy, squat and sinister buggers your average frenchie!” Then after a gap the Dook wrenched the hand that was covering his mouth and shouted. “Still glad the car was a ‘roller’ this time, stronger than the rubbish the krauts make, is the car still drivable – maybe we can salvage some parts this time.”

Prince Charles is heir to the British throne but few if any apart from his diplomatic son believe that he will ascend to the throne after his Mummy dies because of his ridiculous behaviour belief in odd cults such as homeopathy and statements like the one in September 10th, 1996 below, which was reported by the daily newspaper ‘The Sun’ on the front cover.

Copies of the Cat’s masterpiece of feline literature can be purchased at a bookstore near you or at Amazon.com or at what The Cat calls his www – wickedly wonderful website here www.thecatsdiary.com.