Yesterday I was highlighting just how awfully politically correct and authoritarian the UK government is with a very small example of the madness of not allowing someone to put posters up asking if anyone has seen his Cat. 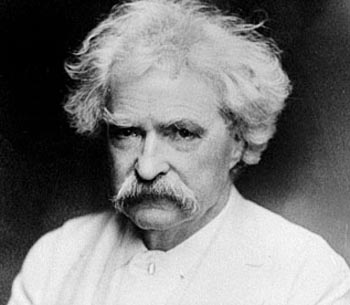 Today I see that in the US there is the same sort of politically correct nonsense going on and worse this form of political correctness seems to be firstly generated by a commercial company and secondly against one of the 19th/20th century literary geniuses and his books Tom Sawyer and Huckleberry Finn which of course was one of the first anti-racist novels and some would say the greatest.

In the ‘new’ editions of both Adventures of Tom Sawyer and Huckleberry Finn which contain the offensive racial epithets “injun” and “nigger” have had the words replaced with “Indian” and “slave” respectively.

Now I have to say that the words replaced are by today’s standards probably not very nice words, and here obviously I would like to apologise to all the rap artists, hip hoppers and other generally black musicians, actors and comedians who refer to themselves and each other loudly and regularly as ‘nigger’ but spelt with an ‘a’ I believe, who should stop using the word and cut it out of any recordings, live acts and the like forthwith!

Personally I think that the people who carried out this censorship have the same political views as all of the famous fascists and communists regimes of the past rolled into one – they should be ashamed of themselves for tampering and ruining a great piece of art.

All of which makes me wonder what will happen to my books in 100 years time? Which words will some little Hitler want removed from my masterpieces of feline literature, or will my book and so many more see the hot end of a bonfire before that time? Sadly when you look at the way things are going I have a feeling they will, but then I will be in illustrious company and happily not around to have to endure the world these idiots are creating.

No wonder in his Notebook in 1894 Mark Twain wrote; “If man could be crossed with the Cat it would improve man, but it would deteriorate the Cat.”