Ok I know that I have been “out of the loop,” as they say for a short while. I am sure that you have noticed that your favourite Cat who writes blogs and more has been missing from the internet, not making a single Tweet on Twitter.com and unable to perform even the most basic computerised chore – but I have a great excuse.

To write my masterpieces of Feline Literature, compose wonderful award winning blogs and generally get in most people’s way electronically, I use an Apple Computer, I have used one for years, but I don’t want all of my wonderful cuddly readers to think that I am a computer bore on top of all of the other subjects which I can, and do, bore them with, so I won’t go into just how long I have been a Apple user or at the heartbreak caused by being left out of Steve Jobs Biography completely! But that is another story for another blog I fear.

Right now I want to tell you of the awful problem that I have spent the weekend trying to resolve with my Computer Boffins here at Cat World HQ.

Trying not to sound too dramatic (of course and failing) all I can say is that I have been attacked by a Lion.

The Lion took the form of a so called ‘operating system.’ In fact I spent most of the weekend trying to fix all sorts of madness and confusion that installing Mac OSX Lion caused.

From watching my mouse pointer go backwards to my zippy computer being reduced to the pace of Dave the Cat on a stroll – I probably have to explain here that Dave the Cat hates walking, and even strolling for that matter, I personally think it has a lot to do with the bobble hat, it covers his eyes as you will know if you are a regular reader and if you aren’t I’m not going to help you here, you’ll just delve into my archives and find out the connection for yourself. It’s enough to say that I think I have seen twigs walk faster than Dave the Cat if you ever a manage to trick him into a walk. 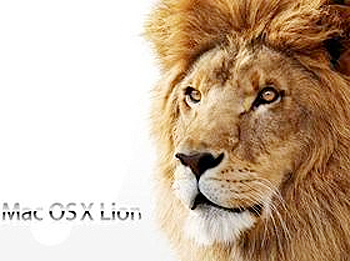 There are loads of problems, as I discovered, with Mac OSX Lion and they are all to disappointing and frustrating to mention here frankly, but I will say this I used to love Apple…

Still I think I have managed to sort out most of the problems with the help of my light-fingered boffins – not they aren’t that clever with their hands to be called ‘light-fingered’ the description comes from their habit of pocketing all of my nice little screwdrivers, pens and pencils, still what can you do? As I explain in the book I am writing at the moment which has the working title of ‘The Cat’s Memoir’ (so that you know who wrote it) getting ‘help’ that is useful is practically impossible.

Still to cut a story that seems to be getting longer short when I finished downloading Mac OSX Lion it was very unstable now it is just simply terrible.

I can’t think where I went wrong with Mac OSX Lion! Like an sensible computer user of long standing I am not an early adopter I let other fools rush in and watch their tears at leisure.

Unfortunately I needed to upgrade from the wonderfully cool Snow Leopard to Lion because I wanted to be part of the iPhone,iPod, iPad ‘app’ development process for an ‘app’ that the boffins and I have decided you my dear cuddly readers need and so I had to upgrade to Mac OSX Lion so that I could use the latest app development software.

Mistakenly, but confidently (at the time), I thought that as Lion was on its 10.7.2 incarnation it would be “a-okay” as they say when things are um ‘ok’ I suppose.

Grudingly I paid my real hard earned folding stuff to get a virtual product and like you, I am sure, felt cheated from the moment I watched with a tear rolling down my furry cheek the sum disappear from my bank account electronically, it’s amazing just how that happens, if we tried getting cash in the same way at night I bet we’d fail.

Lion OSX 10.7.2 arrived and I have to say, at the time, I was excited I have rather enjoyed the ‘Cat’ series of Apple Operating Systems and still get excited at the tantalising prospect that the final and ultimate incarnation of this (till now) amazing product could be ‘The Cat OSX’ with a picture of you know who on the box, cover or downloading badge. 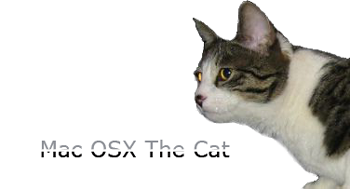 Isn’t that picture wonderful? I think so and I am confident that with the final Cat representing the Mac OSX being me The Cat, Apple will go from a company doing quite well to one that is unbelievably successful, but sadly I think we are digressing here, my time like Apple’s will come.

Lion arrived and what can I say? Maybe it should have arrived with a notice like this one from San Diego Zoo………. 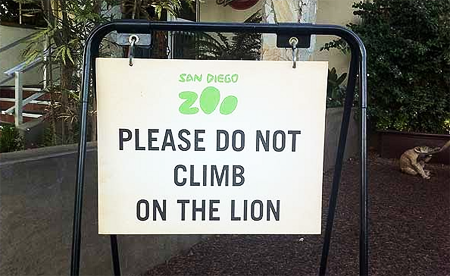 Actually I have to say that Mac OSX Lion arrived reasonably quickly thanks to the Czech republic considering that fast broadband was something that would not only prove to be ‘handy’ for everyone but also would help business.

Unlike some backward countries like oh say for instance Cameronland, the island that is now totally isolated from Europe and soon to be free from Scotland and Ireland with any luck but not if the Chief can help it which of course means that it will happen very soon now.

Isn’t it odd that the Chief of Cameronland wants to stick with the ‘Micks’ and the ‘Jocks’ and have nothing to do with the other “Johnny foreigners” in Europe as I believe he calls them.

Still I suppose you can’t moan too much about idiots like the Chief of Cameronland who at least has been elected fairly. Unlike the Gremlin in The Kremlin who at long last has been seen for what he is by the Russian People – I am taking bets that ‘Putin the Bootin’ will be the next thing the hamfisted government will do in ‘free’ Russia, then there will be a ‘Moscow Winter’ followed by a ‘Russian Spring’ and he will be out of the game completely by the ‘Russian Federation Fall.’

Oops did I say we were veering off the point – sorry we have done that again but there is so much going on and without a computer that was working properly thanks to Mac OSX Lion I haven’t been able to see any news, talk to anyone and do all of the rest of the stuff that you expect to be able to do these days.

So here at long last is a nice picture of my Christmas Lights which I managed to put up on my www.wickedlywonderfulwebsite www.thecatsdiary.com at long last. So that it could complement the snow that I mentioned in this blog – blog.thecatsdiary.com/2011/11/27/snow-comes-to-my-website-blog.

Now if only I could get the snow to work on my home page once again I would be a happy Cat, but I probably won’t be happy until ! am free from a certain Lion which seems to have its paw on my head all the time! 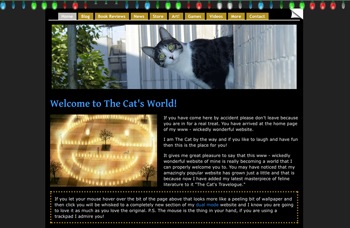 The Cat is one of the most successful feline authors in the history of Cat kind, his sharp elegant wit has produced the bestselling book ‘Getting Out – Excerpts from a Cat’s Diary’ and of course the much plagiarised gag of the same name which appears on all of the funniest joke sites on the internet.

Copies of the Cat’s masterpiece of feline literature ‘Getting Out – Excerpts from a Cat’s Diary’ and ‘The Cat’s Travelogue’ can be purchased at a bookstore near you or at Amazon.com and here for the Travelogue The Cat’s Travelogue Paperback Edition or at what The Cat calls his www – wickedly wonderful website here www.thecatsdiary.com where you can not only learn more about me the genius Cat but also play my games they are all paw picked by me and have been described as “exactly what free on-line games should be, fun, free and fantastic.”

At first when I saw this wrapper I thought that someone had sent me a label from China where Bow Wow and gulp Pussy Cat are regular menu items – but no oddly enough this wrapper comes from Spain.

I can tell you now if this is fast food in Spain I don’t want to try it! Then horror of horrors struck me if they have Dog Bacon rolls will they eat a dessert of Stewed Cat and Custard?

If the Spanish, who I have always found to be rather nice unless you are a Bull of course, treat their animals as fast food like this I think they deserve to follow Ireland and go bust!