It would seem that my last few days here in Prague are being rewarded by lots of sunshine, though I have to say it’s a bit nippy, but unfortunately not as nippy as it is going to be in Siberia, although at the moment it’s raining and not snowing where we are landing.

While I am there I want to do a lot of Cat things and although sampling local Prawns from the River Ob which was turned into a sea, (yes you read that right, the Soviets flooded the area for a Hydroelectric Dam project that ultimately went a bit pear shaped and in the process of building it wiped out millions of acres of pristine wild places) is at the top of my list of things to do, as it should be for any seasoned traveller.

But like any seasoned traveller I want to also want to meet some of the locals both wild and domesticated.

I am sure to meet a Siberian Cat or two, which will be nice, like most Cats they are ‘old’ Cats, some of the originals of the Cat clan as it were, and have been around on , mainly in Siberia which is how they got their name, for 1000 years. 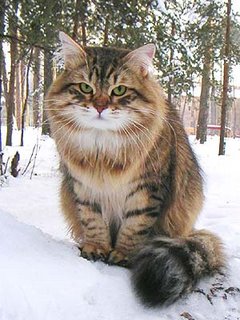 Siberian Cats are now prized additions to many an American household since they started to move to the states after the iron curtain came down.

Now I don’t know if I will be lucky enough to see any of these fine fellows (below), or if I do bump into them whether I wouldn’t be considered to be more of an entree than lunch, but if I could just observe them from a safe distance through binoculars that would be marvellous. 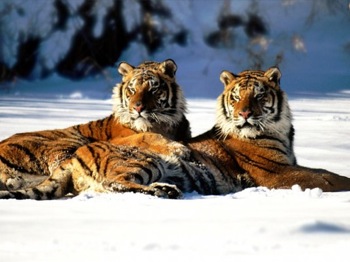 Imagine just being in the same (safe) place as the Siberian or Amur Tiger what a treat. Sadly because the Russians are so bad at looking after their wildlife, forests and everything else that isn’t oily or gassy the Siberian Tiger is close to extinction. There are just a few hundred of them left on the planet, what a sad state of affairs for the biggest Cat in the world at the moment, if that is, there are any of them left!

Sadly the law that protected Tigers from the Russians, the poachers, the illegal deforestation and bribery of corrupt park rangers is virtually non-existent and like most species who are prized by sick people for their fur, teeth, bones and tusks, such as the immensely rich and misguided Chinese, the wonderful Siberian Tiger is probably going to follow its kin in Korea who it seems are extinct already.

Lastly here is one little point about someone less important than Siberian Tigers, in the part of Siberian I’m off to the internet connection ranges from poor to non-existent and so if you don’t hear from me for a couple of weeks from this Friday don’t worry, if you don’t hear from me for longer than that then do please get concerned, panic, arrange search and rescue parties and start to worry a lot!

Who would have thought that so much thought could have gone into a sign about crossing a bridge? 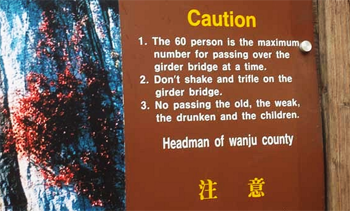 If anyone can tell me what you have to do to “trifle” on a bridge I would be delighted to hear, obviously it is only westerners who are expected to “trifle” on bridges because the sign is in English.

Lastly do you have to slow down for the the old, the weak and the drunken children so that you don’t pass them? And what if one of them stops can you pass them then?

Korea must be such a confusing place if there is so much thought given to something as simple as bridge etiquette.

Ok the publication of my next blockbusting unputdownable book is getting closer as I mentioned yesterday sorry about that but one has to advertise – as President Clinton said if you don’t blow your own trumpet who will an intern? But I digress, here is a picture of a another culinary winner from China which judging by the writing is also a great hit in Japan and Korea “Curry of Mini Child.”

The world is as we know a strange place but it would seem the further east one goes the stranger it gets, you know like going to Brooklyn!

As you can see travelling the world and writing a Travelogue and eating all sorts of weird food was desperately hard, tiring and expensive work even for a good looking Cat and so if you don’t buy my wonderful Travelogue when it comes out I will be deeply distressed and feel very unloved – not to put too much pressure on you dear cuddly readers! 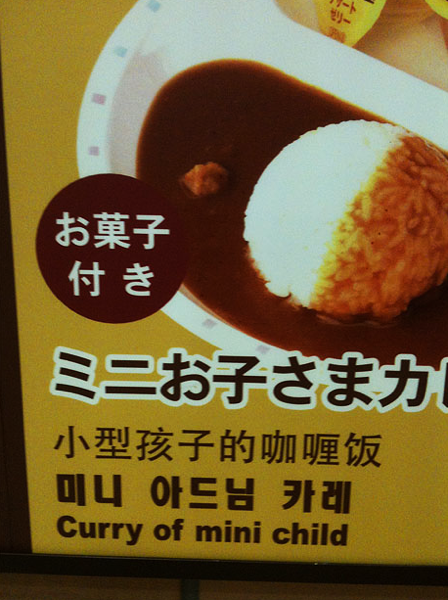 Look she is only little, so why do people make such a fuss about poor Oh Eun-Sun? According to the 3ft 3inch sturdily build Korean (there is only one Korea to Koreans) she has managed to climb all of the highest peaks in the world which is quite an achievement for someone who must think that a MacDonald’s counter is at the top of the world when she is dying for a Big Mac but being ignored.

So why oh why does some clever Richard or is the “clever dick” keep saying that poor little stocky Oh Eun-Sun has missed a significant peak and therefore failed to climb all of the world’s highest mountains, when poor plucky petite Oh Eun-Sun is probably at home with her mountaineers socks off warming her frost bitten chilblanes and trying to recover from a diet of Yaks, milk which apparently turns your stomach into a dangling mess after as far as she was concerned running out of very tall mountain peaks to climb.

Personally I think that the clever Richard is jealous and just because poor little Oh Eun-Su might have become confused at the end of her mountain climbing odyssey and turned right instead of turning left to climb Mt Kanchenjunga, on the border of Nepal, India and China, and gone home instead, it is nothing to get too hot under the thermals about.

Lets face it, if all you have been doing since 1997 when Oh Eun-Sun, who of course is not very tall, started climbing the world’s highest peaks you would get rather disorientated and may forget to climb a mountain or two wouldn’t you especially if it is the last one and some one has called you on your rather outdated mobile phone to tell you that the Shin Ramyun is ready?

Actually I have to confess to getting confused when travelling recently. As I have been writing my latest blockbuster, my wonderful “Travelogue” I have accidentally taken a wrong turning or two myself, but usually I have to add, aided by Dave the Cat’s dreadful directions and appalling map reading skills.

You know, I vote that we vote that poor dwarf-like Oh Eun-Sun be crowned Queen of the Mountains or whatever useless title she is after and let’s brush the Mt Kanchenjunga ‘incident’ under the carpet shall we? After all isn’t it an achievement to climb nearly all the highest mountain peaks in the world? I should say so. Between you and me I get out of breath and giddy just climbing the stairs when slipping off for a snooze on ‘their’ bed so I think that the precocious vertically challenged Korean climbing wonder should get the cake or whatever the prize is don’t you for climbing all of the tallest mountains in the world after all who really cares?

I may have got the exact height of the Korean tiny terror of the Alps wrong, there is nothing in the news to suggest that Oh Eun-Sun is as small as I imagine, except of course the word ‘Korean!’ And that is said with love, Koreans and other tiddlies are really rather nice and happily the Cat can look some of them in the eye without them bending which is handy.

I think the captions says “I need to go to the loo can you turn the camera off for a minute!” But then I might be wrong!