Recently Boston resident Sal Esposito was called for jury service and quite rightly Sal just ignored some idiot human’s flight of fancy and sadly that uncitizen like bravado has landed Sal in a little hot water and he could be in contempt of court.

So is Sal worried? “Not unduly!” He said recently when talking to us here at Cat World and why is that you may ask, well it isn’t because Sal is anything but a model citizen, he is house trained, has been known to catch a Mouse or two in his time and oh yes Sal Esposito is a CAT Cats don’t do ‘worry’ that’s for humans. 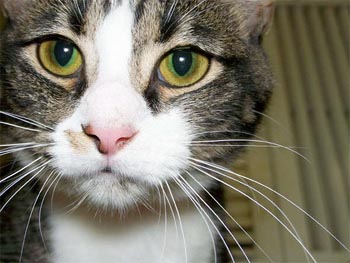 So Sal Esposito is like me, ‘feline’ and that means that he really isn’t required to judge his peers because very few Cats find their way into courts and who in their right minds wants to waste time being a juror to judge humans? Not this Cat nor indeed Sal Esposito.

Sal Esposito’s problems began when his humans Anna and Guy Esposito listed him on the last U.S. Census under “pet.”

The government as usual ignored that information and called Sal up to serve on a jury and so Anna carefully filed for his disqualification of service on a jury.

That sounds reasonable doesn’t it – yes of course it does! Sal is remember a “pet” and loads of ‘pets’ serve on jurys in the states. Unfortunately the forms the government send out that have to be filed in for cases like this list the following reasons why a prospective juror may be disqualified.

So Anna dug deeply into her intellectual resources (which I don’t think have helped her yet) and filed that Sal Esposito “cannot speak English” which is of course true, though why she didn’t, email, write a letter of visit the government department concerned is anyone’s guess, however it is true Sal and most other Cats, unlike this clever cat, doesn’t speak English or indeed write masterpieces in the English language for that matter.

All of which means that Sal is still required to attend Suffolk Superior Court on March 23 and take part in jury selection I think I want to be there too don’t you dear cuddly reader?

Apparently his humans are still trying to clear up the misunderstanding and quite frankly they don’t seem to stand a chance do they? If they fail, unfortunately Sal will be making his first appearance in court.

By the way has anyone noticed how similar Sal and I look – he has a light tan smudge under his nose but in general he is what is known as a very good looking Cat and probably will be a good juror if called, happily I know a translator who is apparently the world’s expert in translating from Cat to English maybe the court could fly him in on an all expenses paid junket to translate for Sal.