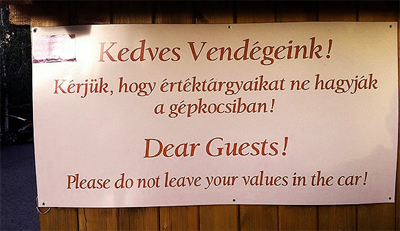 The above nonsense comes from Taiwan which is odd, no not Taiwan, but the fact that I was talking about them yesterday and praising the people who come from Taiwan, (oh what do you call them – ah yes Chinese tee hee) and look what they go and do to a simple KEEP OUT sign!

You know I couldn’t have put that better myself, dangerous Honey Bees are a danger that has to be avoided, sadly though it is the other way around, mankind is killing the Honey Bees with pollution and you better stop soon because even though Einstein was wrong when he said that “If the bee disappears from the surface of the earth, man would have no more than four years to live. No more bees, no more pollination … no more men!” he was almost right.

Oh the reason why Mr Mad Hair was wrong was that most cereal crops such as Rice, Wheat and Corn that humans live on are actually pollinated by the wind and not Bees the planet would be an even worse place than it is now without Bees, no Honey, Fruits and so much more, though happily still Prawns.

I worry about a time when the fighting between humans breaks out about food who will fish for Prawns, I don’t think I can go without Prawns!

Anyway I have been wondering “A warm prompt” – what is one of those? You understand I don’t want one I just want to know if that is ok and while we are on the subject what other nonsense did Albert talk well here is a prime piece of rubbish straight from the scientists mouth try this flash of brilliance. “Put your hand on a hot stove for a minute, and it seems like an hour,” which proves we aren’t all perfect are we?